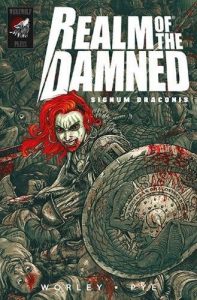 One of the most well-worn misnomers in the music business concerns the “difficult” second album, especially when said record is the follow up to a particularly successful debut.  The faulty logic that inspired it was originally given shape when bands were rushed into a studio before they were ready in order to capitalise on the previous victory. The resultant lack of preparation and insufficient material meant that the album would flop and more often than not, resulted in said bands imploding. It’s an analogy that’s crossed over into the mainstream and been appropriated to describe books, films, television shows, and in much the same manner as I’m about to do, graphic novels and comics. Signum Draconis is the second act in the Realm of the Damned series and follows the rather splendid Tenebris Dios. Except it doesn’t. In order to avoid succumbing to the pitfalls and perils of the dreaded sophomore endeavour, instead of trying to create a sequel to a story that ended in such a way that would make such folly difficult, if not nigh on impossible, Alec Worley and Pye Parr in Signum Draconis have travelled back in time and elected to explore the history and back story’s of the protagonists and villains, and thus the world they helped to forge, who brought the world to its knees in Tenebris Dios.

Signum Draconis is a brutal tale of a parallel world in which the Vatican wields it’s power like a hammer in order to control all, recruiting vampires and monsters in order to strengthen its hand, offering them protection and aid in return for their allegiance, servitude and devotion. It’s a story of corruption, of the central characters corruption as he’s dragged out of the light into darkness and seeks to feed off the world and those around him without consequence or recrimination that draws its influences from Paradise Lost and humanities own gradual descent into the stygian clutches of madness and self-destruction.

Serving as a parable of the history of man, and drawing heavily from it while ridiculing the worship of deities and false gods, Signum Draconis isn’t afraid to create its own version of hell, one that’s writ large over the landscape of medieval Eastern Europe, as beast and acolytes fight for their home, people and countries by any and all means necessary. Rather than avoiding, or averting its gaze from, the barbarity and inhumanity of war and the lengths that people, creatures and the undead are prepared to go to in order to triumph, Alec Worley’s story clutches them to its crimson soaked bosom and revels in them. And thanks to the hideous detailed art of Pye Parr that looks like a Black Metal video that’s been bought and paid for by Hammer Studios, written by the alumnis of the Black Library and directed by HR Geiger , it’s as visually striking as it is enjoyable to read. George Lucas could learn a lesson or two from Parr and Worley as Signum Draconis is proof positive that not all prequels are equal.  Sometimes they can rise above, and better, their progenitors. Praeclare commendatae… Tim Cundle