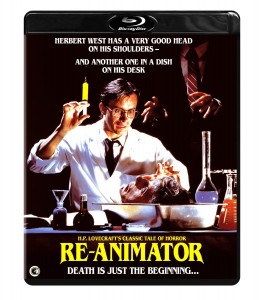 This OTT cult sleeper has been cut and butchered so much over the years, it’s high time it got the respectful reissue it deserves, and here it is. This double-disc blu-ray is easily the best presentation you’ll see of the film, and it’s great to get that infamous ‘head giving head’ scene in all its deranged glory once again. The story, for those who don’t know, revolves around Herbert West, a coldly ambitious medical student who arrives at the Miskatonic University armed with a garish glowing serum that brings the dead back to life… albeit in a rabid, cannibalistic state. Oh well, you can’t have it all ways, I suppose. Of course, there is soon all manner of gory fun splattered across the screen, with ‘fun’ being the operative word, director Stuart Gordon keeping his tongue firmly in his cheek, and taking full advantage of a stellar cast, the end result sitting nicely alongside ‘The Evil Dead’ as a bonkers slapstick video nasty… We hadn’t seen anything like it when it landed, and we’ve not seen anything like it since.

There are plenty of extras to tempt you to part with your cash as well: the steel box looks killer, there’s an exclusive ‘Integral’ version of the film, interviews galore, an hour-long documentary, ‘Resurrectus’, a raft of extended scenes, and an amazing deleted sequence that will keep fans of Barbara Crampton awake for many a night. In short, everything you could possibly want – and more – if you’re a fan of this goofy gorefest.  Ian Glasper