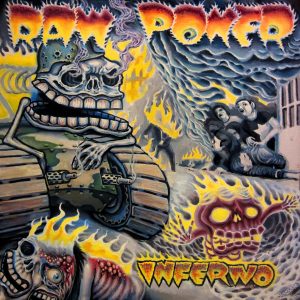 Whoever said that hardcore was a youngster’s game obviously failed to tell Raw Power. If they had, this Italian HC powerhouse would have laughed in their face, flipped them the bird and without a second thought would have gone straight back to doing what they do best, playing balls out, high speed, metal tinged punk rock.  Having embraced the Crossover movement and incorporated it into their savage, full throttle, rage fuelled Hardcore attack nearly three decades ago, Raw Power continue to plough their own furrow and have never sounded like anyone else. They’re innovators not imitators and while age and maturity may have allowed them to become better musicians, it hasn’t dampened their anger or energy, and Inferno would put ninety five percent of the bands who are young enough to be Raw Power’s progeny to shame. Inferno is exactly how Hardcore should sound. Pissed off, loud, fast, furious and rammed to bursting with sing-a-long pit anthems. Feel the fire… Tim Cundle