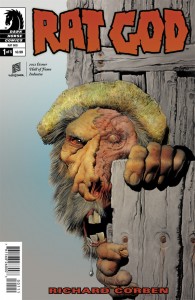 The opening pages of ‘Rat God’ build a sense of impending dread and panic – originally meaning a sense of terror felt in the woods or forests- skilfully, and it’s a whole eight pages before a tit pops out, demonstrating Corben’s restraint in his older age. He almost managed to not be gratuitous. Almost.

The tale tells of two Native American or prehistoric Hyperborean types- it’s not too clear- fleeing their sinsiter tribal enemies when the female of the pair- Kito- is suddenly, inexplicably transported to 1930’s America. There she is briefly glimpsed by an intrigued Clark Elwood- It seems their fates will be somehow linked. Clark is an unreformed old school racist with few redeeming features. I’m not sure whether his resemblance to a beefcake HP Lovecraft was intentional or not, and I’m sure as shit not getting into that tired old “typical of the time” chestnut. Clark is seeking out a mysterious girl he met in Miskatonic University. It seems predestined that what he will find is very far from what he hoped for.

The setting in Lovecraft country is intriguing, as are the liberal sprinkling of Fortean phenomena in the tale, but little is established in the first issue, save a lot of questions. The story is intriguing enough to warrant me reading the second issue though, so it serves its purpose well enough. Corben’s artwork is of course the real star here, though, like an old friend returning after years away, with a warm welcome and hearty embrace. And of course, the old friend has massive tits and a loin cloth. There’s only one Richard Corben. Good for him. Don Doomcock