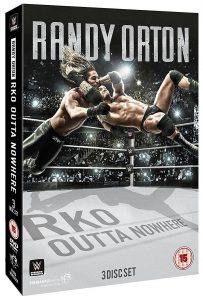 This fantastic three disc collection was a lovely surprise to me.  Despite always being a fan of Randy Orton, he is also, paradoxically, one of those wrestlers whose actual matches, in hindsight, always feel forgettable.  He has been at the helm of some super-heated rivalries over his lengthy career, and – as the title of the collection suggests – has hit some heart-stopping RKOs from a plethora of innovative positions, but beyond that thrilling, blink and you miss it, moment (and his trademark draping DDT over the ring-ropes), when I think of Randy Orton, I think of lengthy rear chin-lock segments and one of the slowest walks to the ring since The Undertaker.

This collection forced me to confront that paradox – how can a wrestler I am always pleased to see really have had a string of boring matches with nothing to them but a clever climax?  It also forced me to confront another false belief I have hitherto held: that Randy Orton is a fairly unlikeable character in real life.  Rumours about his youthful backstage antics always made me assume the guy was a bit of a brat, entitled because of his third generation status, and arrogant to boot.  His occasional troll-baiting tweets in recent years haven’t helped change that opinion, nor have his less than successful runs as a babyface in WWE, all of which seemed to belie a natural proclivity for being a bad guy.  So the lovely surprise I alluded to in the opening line of this review was that after watching three discs of Randy Orton’s greatest matches, all hosted by Orton himself, I discovered that Randy is a really humble and personable guy and that his matches are a masterclass in variation, technique, timing and impact.  In other words – intellectually I was completely wrong about everything I had previously thought about Randy Orton and my gut instincts were right: Orton is awesome!

Matches on offer range from his green as grass debut in Ohio Valley Wrestling, to dark match try-outs and early OVW encounters with the soon-to-be John Cena, to his days as a legend killer, to becoming a founding member of Evolution, to his Rated RKO days with Edge, to his latter days as a solo legend.  They include stand out matches against Seth Rollins at Wrestlemania 31, his unification title TLC match against John Cena, five star affairs against Shawn Michaels, CM Punk, Chris Jericho and Christian, and fun oddities such as an untelevised match between Orton and HHH, or his title match with Jeff Hardy from the 2008 Royal Rumble.  Each one shows how Orton is able to adapt to a variety of different opponents and styles and put on a clinic of psychology and skill to draw out the desired reaction from the crowd.  The most notable example was his participation in a Money in the Bank ladder match – which I have now seen three times – in which he somehow manages to never fall off a ladder and yet simultaneously make it impossible to notice throughout the crash and burn battle that he doesn’t!

The Orton interstitials themselves are great insights into the various feuds and friendships that got him to where he is today.  You hear mainly about how generous Randy’s fellow wresters are, and the significance they had in his career, from surprising characters like Mark Henry to the more obvious Evolution members, Triple H and Ric Flair.  The only real digs are made towards Bob Holly, for his bullying style and unnecessary hazing of younger talent.  And Orton makes a point because of his experiences with Holly, of trying to put the young talent over as he now reaches the winter of his career (a fact born out in the current WWE with his role in revitalizing the tarnished Wyatt Family brand, but demonstrated on the DVD with a triple threat match between himself, Kevin Owens and Cesaro).

All in all, this was a compelling and entertaining DVD set which, had I seen it on a shelf in a shop I wouldn’t have even considered looking at, let alone buying, but now, having seen it, I can safely say is a hidden gem in any wrestling fan’s collection.  I thought my feelings on Randy Orton matches were clear but, outta nowhere, this set came along and challenged those prejudices completely.  Do it!  Dan McKee