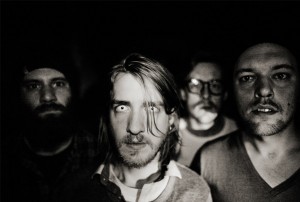 Watch the video for ‘Florent’.

The gargantuan sounding RKTKN#2 album from Belgian four piece Raketkanon is scheduled for release on April 13th in the UK, who have also announced a UK tour today for April/May.

The band have also released the B-Side to the sold out limited 7” release of ‘Florent’ today; a total sludge-hammer of a tune called ‘Abraham’ that creeps, builds, breaks and destroys.

Recorded almost entirely live in Electrical Audio in Chicago over five frantic days with Steve Albini, RKTKN#2 is very loosely part of a historic lineage of bands that the Big Black/Shellac frontman has worked with previously – think Nirvana, Neurosis, The Jesus Lizard – yet arguably even heavier, sludgier and more abrasive than any of them.

This is a sound that drips from your speakers like a spilled jar of molasses. It’s thick and gloopy, black-hearted, portentous, musically malevolent, brilliantly vile – but emotive and moving too, and with strong post-rock dynamics. The funereal flourishes and synth squelches meanwhile take the band onto to a whole other sonic plateau.

“We make music that we think is beautiful,” says guitarist Jef Verbeeck. “There’s no irony here. No macho stuff.”

Singer Pieter-Paul Devos shifts between hollering and howling like the last screaming soul in an otherwise derelict asylum and a whispered, speaking-in-tongues cant, but there are nuances and subtleties there too. Tones. Here, lyrics are secondary to feeling. After all, why express how you feel when a Munch-like howl of discontent can say so much more – and so succinctly? “This band can’t bear clichéd lyrics,” says the frontman:

“The abstract and eclectic nature of the music demands something that’s based on raw emotion. Primal, but not bone-headed. Aggressive, but never macho. Romantic but not corny. We’re heavy but we play with the utmost love and respect. I certainly believe in the power of a good lyric but when started, this band’s music clearly demanded something more – something beyond the simple spoken word.”

Raketkanon formed in Ghent in 2011 and enjoy self-destruction and wanton celebration in equal measure. They combine post-rock, sludge, grunge and hardcore sounds and collectively enjoy bands such as Butthole Surfers, Queen, Black Flag, Melvins, Hendrix, Dylan, Jesus Lizard, Jonathan Wilson, The Beatles and countless others. As a result of this concoction of mayhem their live shows soon became the stuff of legend.

Pre-order the album RKTKN#2 scheduled for released on KKK Records from raketkanon.bigcartel.com

See their explosive live show for yourself on tour in the UK this April/May at the following shows: