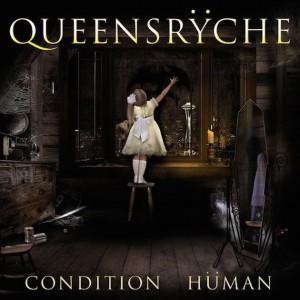 Queensryche – Condition Human CD (Century Media)
To be honest I wanted to hate this record. After witnessing a diabolical performance in the UK last year, I was left convinced Geoff Tate was irreplaceable. Then after hearing the new advance track from this album, and watching a first rate performance of the band at Wacken Open Air this year, my opinion started to transform. Todd La Torre has now found his feet and ‘Condition Human’ is an outstanding Queensryche album. Maybe it’s because these are new songs, maybe it’s the quality of the music itself, but one thing that is for sure here, tracks like ‘Guardian’, ‘Arrow Of Time’ and the slower paced ‘Bulletproof’ will soon be regarded as Queensryche classics. They will sit comfortably amongst any of the older material. The band have kept the tone and sound that has sold them +30 million albums, they have not altered what we want, but with Todd La Torre they have found a vocalist who can fit with this style, and the addition of Crimson Glory tones brings and further dimension to the sound; very much focusing on cutting guitars and powerful vocals ‘Condition Human’ sounds like a revitalised band. Here Queensryche have not tried to re-invent the wheel, just fix it. Twelve tracks and fifty-three minutes – one damn fine comeback Mr Rockenfield. Mark Freebase