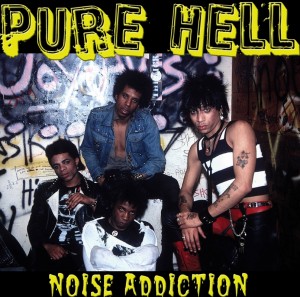 Cherry Red have dug deep into the vaults of musical history to dig this one out! Pure Hell have been described as “the first ever African-American punk band”, originally formed in 1974 in Philadelphia, and although there have been various releases floating around over the years, the only record that came out during their lifetime was a 1978 single featuring their version of “These Boots Are Made For Walking”. These recording sessions are also from 1978, and are an excellent showcase of the Pure Hell sound. Encompassing rock, glam and proto-punk influences, these songs throw together the likes of MC5, Mott The Hoople, The New York Dolls, Thin Lizzy and others, creating their own wild and unique sound. In fact, this also sounds like it has been a direct influence on the first generation of American hardcore bands, as the likes of Circle Jerks or Angry Samoans owe a lot to what is going on here. These recordings ooze attitude and energy, and make for a worthy addition to the collection and not just for music historians, but simply for the fact that these tunes rock. Tom Chapman