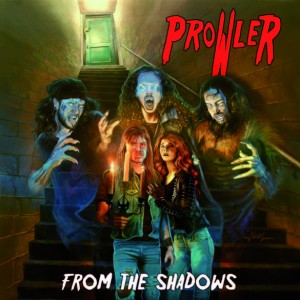 Prowler – From The Shadows (Slaney)
Forget about these bands trying to re­invent the wheel. Prowler would rather return to the time before the wheel was even invented and just party to old school thrash, until we end up on all fours. The problem however is that with the style Prowler is playing they will have to enter the ring with the likes of ‘Alice In Hell’, ‘Under The Influence’, ‘Ride The Lightning’, ‘The Legacy’ and numerous others. We all know this fight is going to end in a knock out for the new comers, but Prowler offers one hell of a fight. They thrash, maim and kill and are not afraid of showing their love for mostly, early Metallica, with a much rougher edge. ‘I Am Wolf’ leans heavily on Metallica’s ‘Of Wolf And Man’ while ‘The Thing Not Seen’, is nearly a carbon copy of ‘The Thing That Should Not Be’. Sometimes the influences work, sometimes they don’t. I could also do with fewer film soundbytes. An album of mixed emotions by these young Americans. Martijn Welzen