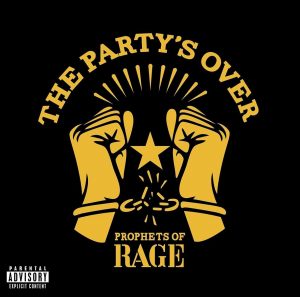 The release of their self-titled album in 1992 instantly put Rage Against The Machine on the map, the angry political raps of Zack de la Rocha fused perfectly over the harsh but funky guitar and bass riffs that had failed for many acts previously. But something always felt a bit ‘off’ with them compared to smaller acts who never got the fame, and with the split of de la Rocha from the band and the creation of Audioslave, it always felt like maybe there were different motivations at play.

With Prophets of Rage, the remaining members of RATM add Chuck D of Public Enemy, and B-Real of Cypress Hill to make what on paper appears to be a 90s powerhouse super-group. In reality, it falls down considerably from the word go. The original tracks feel like remnants of songs written 20 years ago that weren’t good enough to make it then, while the live covers do nothing but emphasise mismatched styles between the new members and old. It feels like nobody is on their A game, and there’s no real desire to do anything better than simply exist.

Hearing Tom Morello talk about the group, it’s hard to take them seriously. His naivety to the world around him says more than the music does, and simply put that’s the most telling thing considering the message they’re trying to put out. Both Prophets of Rage, as a touring act and their first EP, feel like a cash in act desperate to cling on to relevance in a scene that’s moved on considerably since their respective heydays. It’s telling that Zack isn’t involved, and I’d suspect some of the other members are wishing they’d let it rest too. James Connors