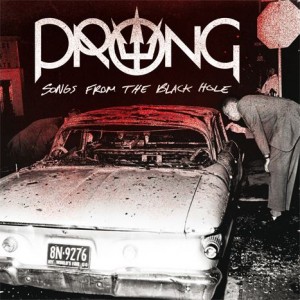 Prong – Songs From The Black Hole CD (Steamhammer/SPV)
So… forget that this is a covers album, stick it in, and turn it up. ‘Songs From The Black Hole’ definitely carries a strong Prong presence all the way through, the ten tracks aired here are given a distinctive Tommy Victor work over thankfully – now that is the sole point of a covers album (otherwise, go listen to the originals!). The usual suspects may appear here i.e. Black Flag, Fugazi, Killing Joke, Discharge, Sisters Of Mercy etc, but the songs chosen will probably not be the ones easily predicted by those looking to criticise. The ferocity of tunes ‘Doomsday’ (Discharge), ‘Banned In DC’ (Bad Brains) and ‘The Bars’ (Black Flag) has all been kept, the heavy rumble to ‘Vision Thing’ (Sisters Of Mercy) and ‘Goofy’s Concern’ (Butthole Surfers) is abundantly present, the eeriness given to Neil Young’s ‘Cortez The Killer’ can be felt distinctly, and if your looking for explanations why… well that’s what the liner notes come to aid. ‘Songs From The Black Hole’ is a very dark affair; take heed from the title, it emulates sinister atmospherics through the selection of songs and equally robust artwork, pulling together pure urban decay. Mark Freebase