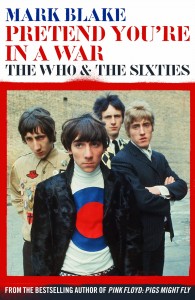 Pretend You’re In A War: The Who & The Sixties – Mark Blake (Aurum Press)
This weighty hardback has ambitious plans – to tell the tale of the band The Who from their fledgling post-war upbringing through to the heady days of the late sixties. It is clear that author Mark Blake has put a tremendous amount of research into this project, collecting interview material from literally hundreds of people to put the story together. The story traces the band right from early childhood, painting a vivid picture of what post-war Britain was like. That aspect alone makes this an interesting piece of history, telling the story of a bygone age, but with the lads going through the same growing pains that people still endure today. It explains the harsh abusive upbringing that Pete Townsend experienced, and how it became a theme that would crop up in his songwriting later. Otherwise it is fascinating to see how our musical tastes evolved, from an RAF Dance Orchestra, to jazz, to rock’n’roll and skiffle which is where Pete Townsend, Roger Daltrey and John Entwhistle started making waves under the name of The Detours. Shortly afterwards, Keith Moon comes into the picture, not so much quietly through the back door, but more like an explosion in the centre of the room. The history is accompanied by so many first-hand recollections, giving you a genuine insight into what the world was like, as the mod scene emerged followed by the hippie era pyschedelia and the accompanying sex, drink and drugs that was part of that world. If you add to this some genuine tales of good and bad luck, rock’n’roll debauchery, and bizarre tales of how the music industry worked, you have a very engrossing tale. As the title says this book features the Who in the sixties, and I would have loved to read as much of an in-depth story of the seventies era. But the book really does stop at the end of the decade leaving you as all good rock shows should do – wanting more. Tom Chapman