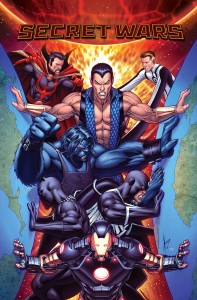 Universes are colliding. The Marvel Universe as you know it is about to be destroyed. SECRET WARS #1 is just around the corner. But the path to 2015’s event to end all events can be found in the SECRET WARS PRELUDE TPB! Hitting stores the same day as SECRET WARS #1, this epic collection is the perfect chance to get caught up in time!

An event 30 years in the making, relive important stories and signposts on the road to SECRET WARS #1! What does the senses-shattering conclusion to the original 1984 Secret Wars have to do with the Secret Wars of today? What secrets lie in the Illuminati’s discovery of the Incursions? What threats lie in a universe created by Doctor Doom? The Ultimates face a foe more powerful than the gods – and Reed Richards is its leader! But why? And what does Miles Morales, the Ultimate Spider-Man have to do with it all? It’s all been leading to this!

“These primer TPBs have become hugely successful over the years for both retailers and readers,” says Marvel SVP Sales & Marketing David Gabriel. “A single volume of stories, these collections are the perfect way to catch up, see the building blocks of the event, and be ready to jump head first directly into the first issue! Carefully handpicked tales from Marvel’s SVP Executive Editor Tom Brevoort, this volume is chock full of the titanic tales you need to read, or reread, before the release of Secret Wars #1!”