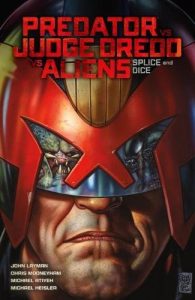 Old Stoney Face, Arnie’s number one nemesis and Geiger’s near indestructible chest bursting horror in a fatal three way match with the future of humanity and Earth at stake? Yeah, you can bet your last pre-Brexit fiver* that this collision of three of Science Fiction’s biggest comic and film franchises is going to be filled to bursting with blood, guts, gore and more weirdness and insanity than a David Icke lecture.  And if you’d taken that bet, then you’d be significantly richer (well, five quid better off anyway), because all of those lurid, violent fantasies that are playing out in your mind’s eye right now; you know the ones created solely by the title of the book?  Well, that’s exactly what you get in John Layman’s story of crazed genetic experimentation, Dredd and Anderson venturing into the Cursed Earth to capture a rob-cult leader, Predators attempting to track one of their own and a mad scientist hell bent on forging his own vision of evolution and bringing Mega-City One and Humanity to a cataclysmic end.

Soaked in viscera, brutality and bloodshed, but bolstered by the kind of lightning quick, rapid fire storytelling that made Joe Dredd the household name in merciless law enforcement, Splice and Dice captures everything enticing and exciting about its cast of A-list players.  Amplifying each of its marquee and cover names to the nth degree in its all Lawgiver’s plot, Splice and Dice delivers a maximum dose of thrill power that goes all the way up to four on the Mean Machine-o-meter. If Philip K Dick had teamed up with John Wagner to update The Island of Doctor Moreau and they’d then asked Guillermo Del Toro to make the movie of their story with the proviso that he added as many monsters as possible, then in all likelihood, the finished film would be, frame for frame and panel for panel, Splice and Dice. Layman and Mooneyham have delivered a future shock tour de force in which the gorgeously detailed art and hard as nails prose are perfectly balanced in a tale that should put mile wide smiles on the faces of fans of all three featured franchises.  Zarjaz…  Tim Cundle