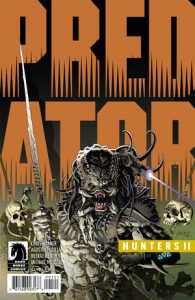 If ever there was a franchise that needed a kick up the backside, then it’s Predator. When Arnie (armed with a string of one-liners) and his band of merry men hit the jungles of South America for an extraction mission, only to find themselves hunted down by a particularly nasty alien in the classic 1987 movie they kick started the franchise, but also set a benchmark that it’s never been able to live up to since. A half decent sequel followed the movie and Dark Horse Comics have put out some very good books in the past, but a series of awful team ups’ and crossovers, both in film and comic form have tainted the most feared alien in the universe’s credibility somewhat. You name them and the Predator has probably fought them, Judge Dread, Batman-they’ve all faced down the crab faced one.

Hunters II once again turns the concept of the original movie on its head with the Predator itself becoming the hunted.  Drawn to war, the Predator scales the mountains of Afghanistan and the South Pacific, where the depleted numbers of the Hunters are there to rid Earth of this menace once and for all. But they aren’t the only ones looking for the alien as a mysterious government group joins the party, whose intentions are not yet clear.

I can’t say I was thrilled with the premise of the big guy becoming the hunted, but it works and along with an engaging storyline, the brutality that we associate the Predator is back as it wages its own war on terror. Written by long time Dark Horse writer Chris Warner everything we love about the Predator is present and correct and with a new movie expected later this year, this iconic franchise may finally get the attention it deserves… Chris Andrews