Warning: preg_match() expects parameter 2 to be string, object given in /var/www/vip4/sites/vip6102689/httpd/htdocs/wp-includes/formatting.php on line 4866
 Positive Force: More Than A Witness - 30 Years of Punk Politics In Action - Mass Movement
x
Spread the love 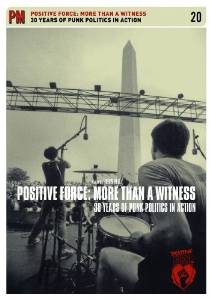 Positive Force: More Than A Witness – 30 Years of Punk Politics In Action – DVD (PM Press/Bell Visuals)
Doing exactly what it says on the tin, ‘More Than A Witness…’ covers 30 years of the Washington DC Positive Force chapter, recounting its origins in 1985’s Revolution Summer, development and current on-going work with the We Are Family Senior Outreach Network organisation (who will receive proceeds from the sale of this DVD). From the formation of the original Reno PF chapter by Kevin Seconds, the film details the groups desire to be more than just a witness to local and global inequality and for punk to be more than just a soundtrack in the fight against racism, sexism, homophobia, homelessness, war, environmental destruction, corporate globalisation and animal rights.

Taking their cue from Crass and the Dial House commune, co-founders Mark Anderson and Jenny Toomey explain their motivations in setting up the group and how they embraced people of all ages, cultures and backgrounds to create a Positive Force for change, working with countless other Washington DC groups and eventually organising over 500 benefit concerts, protests, food drops and other direct actions.

The film follows the standard oral history format featuring interviews with Anderson and Toomey along with other notable figures including Ian MacKaye, Jello Biafra, Scooter Thompson Kathleen Hanna, Allison Woolfe and the ubiquitous Dave Grohl (whose input really only runs to his recollection that his first show with Scream was a PF benefit) interspaced with live footage of 7 Seconds, Bikini Kill, Rights Of Spring, Beefeater, Fugazi, Scream and Anti-Flag playing benefit gigs.

It’s an inspiring tale of what can be done when people work together with focus and purpose; obviously it’s not all sweetness and light and inevitable fractures have occurred along the way (when Toomey’s record label Simple Machines were interviewed by MTV at the PF house which did not sit well with Anderson’s punk purist principles, for example) but the energy and passion of the activists involved shines through, and their involvement 30 years later speaks volumes of their commitment and enthusiasm to making a real change in the world. Positive Force I salute you. Pick up this DVD and be inspired to make a change too. Ian Pickens