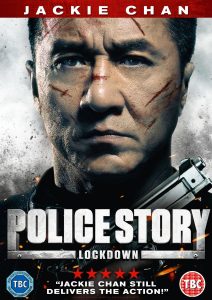 The Police Story franchise, which began in 1985 with (funnily enough) Police Story is one of the most celebrated series in the history of Martial Arts cinema; and its star Jackie Chan, is one of the most famous, and critically lauded, stars to have emerged from the genre. Police Story originally became famous thanks to its high velocity combination of incredible stunts, fast moving plots and staggering action, but Lockdown unlike its predecessors, for the most part eschews the formula that made the series name; opting instead to travel down a different, more thoughtful, dramatic path rather than one filled with rabid punch and kick filled fights and gung- ho, anything goes chases and furious shootouts. Maybe it’s because its star, now in his sixties, isn’t willing -or able – to put his body on the line to up the ante for his audience anymore or maybe it’s because he just wanted to try and prove what his fans have known all along, that he can act and when given the opportunity, can turn in an electrifying performance that relies on his ability as an actor instead of his stupefying aptitude, dexterity and strength as a martial artist.

That’s not to say that Chan doesn’t fight in Lockdown, he does; but the fight scenes, as brutal and adrenaline filled as they are, don’t take centre stage. The story does. Chan play a Captain Wen, a police officer whose devotion to duty and code of honour have resulted in him becoming estranged from his daughter. When she invites him to a nightclub to meet her new boyfriend, in an attempt to build bridges with his child, he reluctantly attends. This is where things start to go from bad to worse, as he, his daughter and the other patrons are held hostage by the club’s owner, a man seeking vengeance on those he blames for the death of his beloved sister.  As the story gradually gains momentum, the links between the prisoners and their kidnappers are revealed and it soon becomes readily apparent that the only man capable of guaranteeing the hostages safety, and rescuing them, is Wen (Jackie Chan).  Lockdown is a taught, claustrophobic, and at times incredibly dark standalone entry in the Police Story franchise that serves as a reminder that while its star may be getting a little long in the tooth, he still packs enough of a punch to be able to stand toe-to-toe with the best of them. And when he does eventually slow-down, which he inevitably will, given the power of his performance in this film, he could easily have a brilliant second career as a character actor. It’s eminently watchable and hugely entertaining, but then, I wouldn’t expect anything else from Jackie Chan and a Police Story film.  Would you?  Tim Cundle