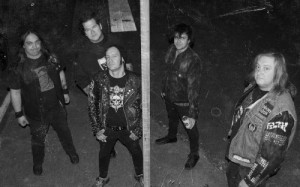 Poison Idea have ended their hiatus and shall return to Europe this March and April. The band will perform at an extensive series of headlining dates in the Netherlands, Germany, Belgium, the UK, France, Sweden, Norway, Poland, Czech Republic, Slovakia, Croatia, Austria, Italy and Switzerland. The full list of dates can be found below. Meanwhile, Jerry A made the following statement…
“Poison Idea are happy to be going back to the U.K. and Europe, to pick up where we left off last year and finish our mission of spreading cheer and love through H.C./Thrash Deathpunk. After a very brief hiatus, we are back. Doing this for 30 plus years, sometimes the thing you love the most is what also wants to kill you. But we promise to deliver the goods, stick to our beliefs and tell the truth and nothing but. We’ve done it for this long, why change now? Looking forward to bringing it soon.” – Jerry A./Poison Idea 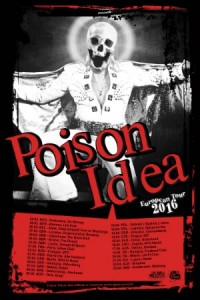 POISON IDEA EU SPRING TOUR 2016
24/03/16 – De Baroeg, Rotterdam, NL
25/03/16 – Lila Eule, Bremen, DE
26/03/16 – Oilsjt Omploft Fest, Aalst, BE (w/ Discharge)
27/03/16 – Underworld, London, UK (w/ Restarts)
28/03/16 – The Black Bull, Gateshead, UK
29/03/16 – The Fleece, Bristol, UK
30/03/16 – Temple Of Boom, Leeds, UK
01/04/16 – Gibus Club, Paris, FR
02/04/16 – MTC, Cologne, DE
03/04/16 – Alte Hackerei, Karlsruhe, DE
05/04/16 – Wild At Heart, Berlne, DE
06/04/16 – Hafenklang, Hamburg, DE
07/04/16 – Babel, Malmö, SE
08/04/16 – Jazzhuset, Gothenborg, SE
09/04/16 – Enga, Oslo, NO
10/04/16 – Ucho, Gdansk (Gydinia), PL
12/04/16 – Spizarnia, Legnizia, PL
13/04/16 – Chemiefabrik, Dresden, DE
14/04/16 – 007, Prague, CZ
15/04/16 –Unterhund, Omoz, SK
16/04/16 – ATC Attack, Zagreb, HR
17/04/16 – Chelsea, Vienna, AT
19/04/16 – Freakout Club, Bologna, IT
20/04/16 – LO-Fi Club, Milano, IT
21/04/16 – Sedel, Luzern, CH
22/04/16 – Bregenz, AT
23/04/16 – Melkweg, Amsterdam, NL
Portland, Oregon’s undisputed kings of punk, Poison Idea released their critically acclaimed Confuse & Conquer LP through Southern Lord Recordingsin April 2015. Setting everything in its path ablaze with the energetic pummeling assault the band has assaulted the planet with for three-and-a-half decades, and by incorporating the use of epic piano segues, the album is an instant classic for all Poison Idea fans as well as one of the most undeniably important releases in the punk/hardcore realms last year. The band’s first new album since 2006’s Latest Will And Testament, and first since the passing of their great friend and guitarist, the iconic Tom “Pig Champion” Roberts, Confuse & Conquer boasts thirty-five minutes of thundering, infectious rage recorded in the band’s hometown by Joel Grind (Toxic Holocaust) and mastered by Brad Boatright (From Ashes Rise) at Audiosiege, and proves that absolutely nothing can stop this legendary act and all attempts are a futile waste of time.
Formed in 1980, Poison Idea became a household name in the hardcore/punk scenes early in their career, and are known as one of the most notoriously in-your-face acts in the American musical underworld, with an enraged, high-energy live set even more rambunctious than the massive roster of singles, EPs, full-length studio and live releases and more, across a realm of labels including Pusmort, Alchemy, American Leather, Bitzcore, Tim/Kerr, Taang!, Farewell, TKO, Southern Lord, Candlelight, and their own Fatal Erection. They’ve been an incredibly influential act to major performers including Nirvana, Pantera, Napalm Death, Machine Head, Eyehategod, Emperor, Turbonegro and an endless list of others. Soaking up respect from generations of hardcore punks and dishing none out, the dastardly denizens of mid-paced punk shred are in trademark form on Confuse & Conquer. Poison Idea’s new masterpiece proves itself both identifiable and rewarding to listeners who have encountered them at any point from their 1980 birth onwards. Their forceful hardcore pummel is underwritten with dark humor, rage, disdain, and moments of real melancholy well beyond the usual remit of the genre, but it’s to be expected of Portland’s nihilistic champions, proudly unaligned with any other sound out there.
Confuse & Conquer LP is still available on colored 12″ vinyl and CD including shirt and vinyl bundles, and the album is streaming in full and available for digital purchase.