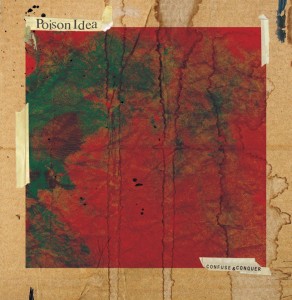 Poison Idea – Confuse and Conquer CD (Southern Lord)
The long awaited new album from Portland’s finest and I think it’s fair to say the band have delivered in spades. Opening track ‘Bog’ is PI doing what PI do best – fast, snarly Hardcore which brings to mind the band’s sound on early classics ‘Pick Your King’ & ‘Record Collectors…’, although the heavy reverb on Jerry A’s vocals takes a little getting used to (it’s only on this track thankfully). With Eric ‘Vegetable’ Olson- back on guitar there’s also a slight return to the hard rock style of ‘War All The Time’ although ‘Me & JD’ has the raw sound of the bands early Germs/Black Flag influences. Not content with blasting out superlative Hardcore, PI chuck us a curveball by throwing out an Angry Samoans-esque garage track in the form of the aptly titled ‘Hypnotic’ and a countrified ‘Dead Cowboy’ Beautiful. Bodes well for the European tour. You know you need this album. Why fight it? Ian Pickens