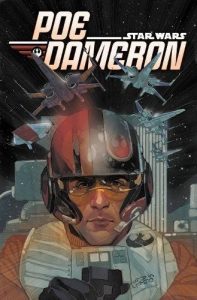 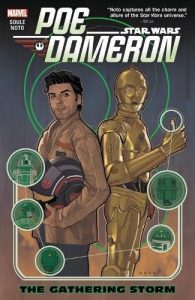 The Force works in mysterious and often unpredictable ways to forge and manipulate the destinies of all of those whose lives it touches. While Poe Dameron is closer to the Solo school of thought concerning the mystical energy field that fills the Star Wars universe than the rigid Skywalker belief in its power, even he would be forced to admit that his life has been guided, and saved on numerous occasions, by “something”. Call it luck, fate or if you’re into wearing cloaks and using lightsabres, the Force, whatever it is, it’s got a vested interest in keeping Poe Dameron in the land of the living and in Black Squadron  and The Gathering Storm ensures that he’s going to be sticking around for a while to come.

Picking up not long after Dameron was “drafted” into the Resistance from the Republic Navy, and before The Force Awakens, Black Squadron sees him given command of an exclusive unit who sole function is to track down the only living individual who knows where Luke Skywalker went.  Pitting him and his comrades against strange cults, weird monsters and the kill-happy population of a prison planet when tasked with bargaining with one of the most notorious Hutt gangsters in the galaxy, it’s a brisk, agile story that also teases the possibility that Poe’s new team has a traitor in its midst while setting an intense rivalry with an agent in the employ of the First Order. It’s a rivalry that evolves and finally comes to a head in The Gathering Storm, an espionage driven story that’s closer in tone, pace and feel to Rogue One than Poe’s cinematic debut in which the age old adage about sacrifices in wartime is rammed home to Dameron and the truth about the supposed “traitor” in Black Squadron’s ranks is revealed. And like its predecessor, it’s an adrenaline packed blink and you’ll miss it chapter in the Rebel pilot’s life.

It turns out that Poe Dameron isn’t the only one that the Force is strong with, as it also does a pretty good job of helping guide Charles Soule and Phil Noto’s hands as they pilot the titular hero through the figurative asteroid and mine fields that litter his new found career in the Resistance. Stewarding Poe from one crisis and conflict to another is the always dependable and ever reliable Soule’s job and his characterisation and plotting are sharper than a Sand person’s gaffi stick and his additions to the ever expanding mythology of that galaxy far, far away wonderfully creative. Phil Noto meanwhile is given the responsibility of the bringing Dameron’s story to life which he does with jaw dropping fluidity and ease, as his character likeness’s are frighteningly realistic and accurate and the amount of detail he puts into every frame makes the Death Star plans look like kindergarten crayon drawings. These are the books you’re looking for… Tim Cundle