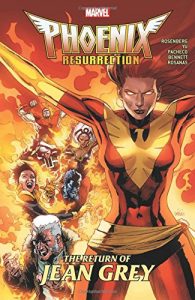 In the world of comics, death, as Nick Cave once sang, is not the end and apart from a few exceptions* to the rule, no-one stays dead forever.  Somehow, someway and at some point, the costumed heroes who have died while doing their duty always return to the land of the living and in Phoenix Resurrection it’s Jean Grey’s turn to shake off the shackles of the grave, dust off the coffin dirt and get back to doing what she did best before she was taken before her time. However, as in life nothing is ever straight forward or easy in four colour land and Jean’s journey back to the X fold is one beset by mystery, tragedy, pain and last but not least, acceptance.

See, Jean doesn’t know that she died, let alone that she’s been brought back to life and is locked in an endless cycle of what might have been if she’d hadn’t been born a mutant. As the title sort of gives away an important plot point, the whole spoiler thing, at least as far as the Phoenix force is concerned, is a moot point as you’ve probably already guessed that it’s Jean’s former partner in superheroics and destruction who’s behind her resurrection. And you’d be bang on target and right on the money if that was your guess, Which it almost certainly was, so you know, go you. But that’s not why you need to read The Return of Jean Grey. No, why you need to read this book is to find out why the Phoenix brought her back while submerging yourself in the global mystery that leads to her former comrades discovering the truth about the all-powerful cosmic entity and to witness Jean slowly realising what happened to her as the threads of the story and sub-plots slowly morph into one, and flow into each other.

Matthew Rosenberg not only manages to humanise a near omnipotent entity and in doing so, turns the usual simplistic, but effective, narrative vehicle of goodies versus baddies and the defined linear progression that separates and identifies both upside down, he also transforms the relationship between Jean and the Phoenix from parasite and victim into something strangely endearing and touching. And while the rest of the X-Men battle to save their friend, barring a crucial interaction between Old Man Logan, Jean and the Phoenix, their presence isn’t particularly necessary as The Return of Jean Grey is really just about two people and the way their relationship has changed both of them and how it has to change in order to secure not only their future but that of every living thing in the Universe as well. Brought to jaw dropping and incredibly realistic life by the combined artistic talents of Messers Yu, Pacheco, Bennet and Rosanas, Matthew Rosenberg’s tale of the return of one of Xavier’s premier team is a mutant powered game changer that’ll alter the immediate X dynamic and no doubt go on to play a significant role in the ever evolving Marvel Universe. How could it not? After all, it’s brought Jean Grey back into the fold with bang that’ll be heard around the world. Welcome home Jean… Tim Cundle