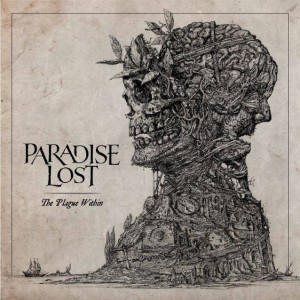 Paradise Lost – The Plague Within (Century Media)
I have been a Paradise Lost fan since the release of ‘In­Dub’ back in 1990, shortly after which I picked up the band’s debut. Since then this band has explored both the human psyche and all angles of doom and gothic-­infused metal for the past 25 years. Every record has a face of its own, but all of them were necessary building blocks that serve to give birth to the band’s most epic record in their history. The reason is actually simple, you can hear ALL of the band’s great features; dark rock, blistering metal, weeping guitars, majestic drums, and that deliciously rolling bass combined. Singer Nick Holmes, at times growls as if he wants to out scream ‘Gothic’ in a style that perfectly summarizes the experience and emotional cargo he has gathered in nearly three decades. The same goes for Gregor Mackintosh’ guitars. Every single stroke of the strings absorbs a well-­placed lifetime of sadness, combining old Paradise Lost with the more recent albums, such as ‘Faith Divides Us’ and ‘Tragic Idol’ as well as Vallenfyre. You just cannot see these things separately as this is what has formed the individual members of one of my favourite bands ever. Above all there’s also new angle you can thoroughly enjoy, like ‘An Eternity Of Lies’ which heads into a different direction. Paradise Lost has come full-­circle and shows they are still on top of their game. Martijn Welzen