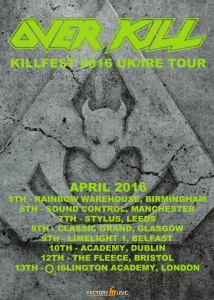 New Jersey-based thrash metal titans Overkill are delighted to announce they will be returning to the UK and Ireland this April for a run of headline shows entitled the ‘Killfest’ tour.

Enigmatic frontman Bobby ‘Blitz’ Ellsworth had to say on the announcement;

“We are happy to announce we are coming back to the UK, to thrash it up with our cousins across the pond! Yes, yes, yes boys and girls from New Jersey to England, Ireland & Scotland the “Wrecking Crew” comes your way next April, kicking off in Birmingham on the 5th. So let’s mark the dates and remember, I’m easily disappointed! HA! Over the wall boys and give ’em the cold steel!!!”

Overkill are currently preparing for the release of their first worldwide Nuclear Blast output, an exceptional limited edition box set of 14 CDs entitled: ‘HistoriKill: 1995 – 2007’ which will be released on October 16th. It will include eleven Overkill albums across 13 CDs plus an extra bonus CD (incl. demos, remixes and an unreleased cover song) all in digi sleeves.
You can pre-order the limited edition box set ‘HistoriKill: 1995 – 2007’ HERE. 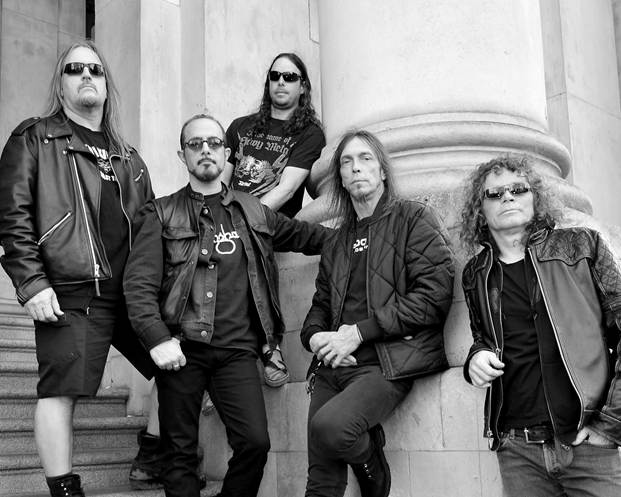 “I think it was my niece who asked me recently ‘What do you really do for a living? Are you a Rockstar?’” Blitz remembers with a devilish chuckle. “I told her, ‘I have spent over 30 years of my life alienating the masses. That’s what I do. But I endear myself to a small minority. That small minority loves me and I love them. That’s how it works.” Blitz lets out a big laugh. “I think she’s still at home going, ‘Hmm, I don’t get it!’”