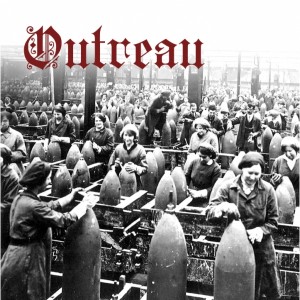 Outreau – 2nd 7″ (UVPR Vinyls)
Not long after the latest Lion’s Law album dropped, the Paris oi! scene delivers its next suckerpunch in form of Outreau’s second self-titled EP. Following on in the same style of their debut, Outreau dispense with any niceties or politeness, these four sounds hit you hard and ugly. Somewhere between Sheer Terror, 86 Mentality and Iron Cross, the common ground is a pair of boots on their feet and a love for the tough sound. But as with those bands, scratch beneath the surface and you will find powerful songwriting and melodies. On this EP there are some fine tunes being elaborated on the bass, whilst the vocals and guitars both have that harsh chewing-on-broken-glass delivery. Musically this is very much a continuation of the style of their debut release. Rough sounds from the city streets. Tom Chapman