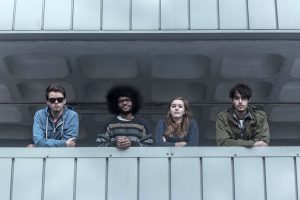 Karum: Need we go into why this is one of the greatest albums of all time? It’s probably RHCP’s most versatile record. It’s got the perfect combination of metal riffage, funked up guitar, punk driven drums, insanely groovy slap bass, quirky psychedelia, beautiful ballads, political lyrics, melodic singing and  everything works so well!! To produce an album so varied but still have every song sound undoubtedly familiar to that band is the real dream. Chad Smith is one of my all-time favourite drummers, Frusciante my all-time favourite guitarist, Flea an all-time fave bassist and Kiedis’ lyrics go from intensely sexual to incredibly thought provoking in the space of a couple tunes. I literally can’t even put into words how much I love this record. Pretty sure we’ve all cried to one of these songs at least once or thrice in our lives too. The drumming on Youth/Caught is heavily Chad Smith inspired and Jim really makes use of that in the newer material as well. Lewis is a pretty big Flea fan too, as mentioned before (as most bassists are to be honest) and this record was just like Flea to the next level. The bass solo in Naked in the Rain is absolutely bodacious (great word).

Karum: That one album that got us all into alternative rock. Hearing this album for the first time is just some kind of experience, you know? It’s like losing your virginity to alternative music and having your mind absolutely blown by the raw and sincerely half-assed nature of 90s grunge. Lewis, Katie and I have all had our respective Nirvana fangirl stages too. Kurt Cobain posters, thermal long-johns and ripped jeans are present in every single one of our 14 year old bedrooms. It wouldn’t be fair not to include this album.

Katie: Nevermind is one of those albums that would be included in anyone’s top 10, it’s a world-recognised classic, the staple diet for musicians of our kind. Side note: I never got to the long-john stage.

Lewis: This album is quite literally the album that got me into music. As a child of around 9 years old I found it amongst my Dad’s CD collection and was intrigued by it so decided to play it. As quite a troubled and introverted child the sheer angst and anger and dischord in the music was so mind blowing and relatable at the time that I would often run home from school for weeks just to listen to it. It has since become one of my favourite albums of all time. Completely beautiful and destructive in its own way.

Karum: We had no idea which Foo Fighters record to include but we settled with ESPG just because of how versatile it is. Dave Grohl’s sense of melody in this album is just so spot on, his vocals are absolutely on point as well. But, Honestly is one of my favourite Grohl vocal performances Let it Die and Come Alive literally make this album though. Shivers down the spine. Every. Single. Time.

Katie:  I’d go so far as to say they are two of the best written songs ever.

Karum: It seems like they thought very long and very hard about this album and what was to go on it and it definitely paid off. It’s incredible.

Katie: It’s really cool to see how the album before (In Your Honour) was one CD of beautiful acoustic stuff, and the other balls-out rock and then they realised they could just create the perfect combination in the same album, even in the same song. They know how to write music that builds and really makes you feel what they’re trying to get across. Long Road to Ruin kind of ruins the perfect track listing for me, I love every other song. I think at this stage the band had really found their sound, which led to one of their best singles The Pretender. I appreciate this album’s existence a lot.

Karum: It was tough choosing between this and FAR Q. I prefer FAR Q’s super emotional lyrics but Another Sad Song, Working For The Man and High at Five still make me feel some kind of way. This album is also really influential in the way I write songs both musically and lyrically. Some of the chord progressions and riffs on this album are just !!!! Basslines and drum grooves are perfect as well – everything on this album just fits together and feels natural and real and powerful. We always use Marilyn’s Mansion as a reference for drum sounds when recording and Another Sad Song for clean guitar tones too.

Katie: I’ve seen this band more than I’ve seen any other so I’m bound to have been influenced by them. Having Karum, also known as LTA’s number one fan from the start, show me them way back definitely helped me writing lyrics, especially when we started out as a band. They’re really straight-forward and simple and it made me realise I don’t actually have to be a poet to say what I want to say.

Karum: When we were recording, Jim once went to the toilet with his laptop and listened to Another Sad Song on repeat for the whole duration.

Karum: There’s just one song on this album that doesn’t sit right – Especially in Michigan. But we’ll ignore that and just talk about how every other song on the album is so so different but perfect. Not in a way that doesn’t fit, but in a way that is just so RHCP. Frusciante took a totally new and refreshing take on his guitar playing – in many songs his ‘less is more’ philosophy works perfectly – on a few tracks he shreds like crazy and it fits perfectly! This album also goes from bone crushingly funky to teary eyed emotional in the space of like 3 minutes and it’s magic.

Lewis: When it comes to softer melodic playing on bass I find that flea is often somewhat overlooked as he’s mostly (though not entirely by all means) known for his aggressive funk-punk playing. However, I find his playing on this album to be extremely melodic and complementary to the guitar work whilst maintaining a strong and tight groove with the drumming. Definitely a large influence on my personal softer playing parts within the band. Tonally, Frusciante on this album sounds incredible, classic strat tones! The diversity within this album song-wise also makes it a very accessible album for all sorts of musical fans.

Doppelganger – The Fall Of Troy

Karum: This is one of my favourite albums ever just because it’s that record that bridged the gap between alt rock and Post-Hardcore/Math Rock for me. The way Thomas Erak uses super jazzy chords in an aggressive context over the top of insane shifting time phrases and rhythmically technical grooves is just insane. It definitely opened the door to a very progressive/experimental/technical way of thinking about rock music.

Katie: We actually used to cover F.C.P.R.E.M.I.X. in our set, it’s a shame we don’t do that anymore! Laces Out, Dan! has been one of my favourite songs since I first heard it. It’s so erratic, I love it!!

Katie: I have a minor obsession with Biffy Clyro. They are one of the best live bands out there and have some serious song-writing skills. This album is probably my favourite – every song has something you fall in love with (if it’s not already enough to be in love with Simon Neil & co). The best song on Puzzle in my opinion is Get Fucked Stud. The lyrics are incredible, and I love the juxtaposition of the lyrics with the lazily-sung chorus, and then it develops into a really energetic song which is perfect in every way. The album is really touching because it’s all inspired by and dedicated to Simon’s Mum who passed away, which is reflected heavily in the lyrics. You can really feel the emotion behind everything. I don’t have anything to fault!

Karum: Have always loved how Biffy incorporate some really progressive thinking and very unique styles into their song-writing yet manage to remain their definitive selves. Keeping the odd mathy sections, the sporadic breakdowns and super catchy/thoughtful guitar riffs whilst simultaneously being one of the biggest bands in the word right now is pretty damn cool.

Katie: I’m not as big a Pumpkins fan as good ol’ Lewis here, but I can say that Mayonnaise in particular from this album is a personal favourite. Billy’s voice is an acquired taste, but I love the effortless boredom he manages to put across, and his kind of nasally tone really suits the band’s style.

Lewis: For a while in college I became pretty heavily obsessed with the studio production side of music and how it all works, and from that I was lead onto this album as it’s notable for the intensive production involved. Sheer mammoth walls of incredible yet clear fuzz dominate this album and create some of my favourite ever guitar sounds, not to mention the powerhouse rhythm section from Jimmy Chamberlain. As by Katie correctly hit on, Corgan’s voice is definitely a marmite voice; you love it or hate it. I personally adore it and find its extremely dynamic soft-loud-soft style very, very effective at delivering his personal emotional feelings. The variety in this album (within staying in an overall 90’s grunge/alt rock feel) is impressive, with notable single Cherub Rock and the head-banging Geek USA powering forwards with attitude, to softer and much more melodically driven tunes like Mayonnaise and Soma (which I heard features sections with up to 40 separate guitar layers) providing a refreshing and intricate break. An absolute favourite of mine, and a staple in my car’s CD collection.

Karum: Never really been a huge Pumpkins’ fan by any means, but Lewis really opened my eyes n ears to their music and Billy Corgan’s absolute genius. They always use really out-of-the box and unorthodox recording techniques which I absolute love love love – and guitar/tone wise(especially for their time), this record is absolute production ‘goals’ if you will.

Songs in the Key of Life – Stevie Wonder

Karum: I’ve always loved the quaintness of this record. Everything is polished and wonderful. It’s such a positive album as well, a lot of alternative music (particularly the music that got me into alt rock) can be pretty dark and otherwise quite negative – but Songs in the Key of Life just screams positivity and optimism which is really nice to hear to be honest! Stevie again (like Hendrix) completely changed the game for genres like RnB, soul and funk and totally brought it to a commercial audience (not necessarily a good thing) but it worked in SW’s favour for definite. Stevie’s sense of melody and harmony was also, as always, exemplary for anyone in any genre.

Katie: Can’t go wrong with a nice bit of Stevie – the man is a genius! His song-writing is inspiring; he manages to create catchy, commercial music which at its roots is original and meaningful and generally pleasing to the ear. Melodically, it is upbeat and funky and fun and it’s just such a nice album. He never fails to cheer me up, especially with absolute classics like Sir Duke.

Karum: Just such an early example of pioneering to break down the walls between rock music and psychedelia/funk/soul etc. Little Wing is by far one of the best songs ever written as well, no question about it.  Jimi Hendrix as a musician did some really cool stuff in terms of blending genres and making music that people had just never come across before and making it commercially popular and really fucking clever.

Hypophora have just released their double A sided single for Youth and Caught which is available on iTunes now.