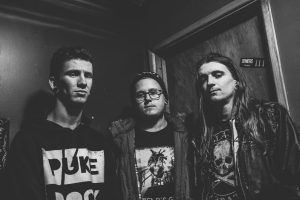 NO BRAGGING RIGHTS – “THE CONCRETE FLOWER” Ben and Lewis : We’ve been into this band for a few years, back in 2014 they put this album out and we’re always reverting back to it, whether for music in the car or for ideas on new songs. The songs are usually 3 minutes of to the point straight up hardcore/melodic hardcore. It’s a great record if you want something loud and bouncy to bop your head to but it also spreads a message, a lot of the songs are based on coping with depression, pushing forward with your life goals and taking the hits in your stride. Hoping they come to the UK soon!

RISE AGAINST – “APPEAL TO REASON”  Lewis: I used to walk to school every morning with Ben and listen to this album, I remember showing it to him and sharing a headphone each. There is literally not a bad song on the album, again another great band that make you want to get up and move but also spread a message, not only that but Tim McIlrath has a great voice. Listen to The Dirt Whispered and Whereabouts Unknown, they’ve stuck with me ever since my school days and you can’t get bored of them.

COHEED AND CAMBRIA – “THE SECOND STAGE TURBINE BLADE” James: When you think of favourite albums, the best are always the ones that have stood the test of time, ones that I discovered when I was younger. This album (and band) are one of my all-time favourites, I just love how precise and inventive the band is instrumentally as well as Claudio Sanchez’s vocals are great, not only that but the band write albums around conceptual themes. Combining all that makes the band for me. Listen to Delirium Trigger

GREEN DAY – “INSOMNIAC” Ben: No doubt about it Green Day are my favourite band, always have been, probably always will be. You probably wouldn’t think it listening to the music we play as a band, but Green Day were the first remotely heavy band I listened to when I was starting secondary school (I think American Idiot had just come out), it literally opened up a whole new side of music, this album was one of their earlier releases. It’s a fast, punky record that never fails to disappoint, I really like the weird and pessimistic lyrics (as weird as that sounds), it showed me that you can write about things that piss you off. This is the go-to “turn it up and shout along in the van” record (much to James and a lot of our friend’s dismay).

BLINK 182 – “BLINK-182” Lewis: Like most people our age, Blink and Green Day were the first bands I really got into, Blink will always be my favourite band, they were the first alternative band I listened to, I remember watching their music videos in I.T. Class, funnily enough that’s how I met Ben, I showed him the video to Feelin’ This and got him listening to them as well. Travis Barker is also my favourite drummer, he makes the band. My favourite song is I Miss You, it was the first song of theirs I heard. I recently went to America on holiday and bought tickets to see them live out there, it was awesome

SLIPKNOT “VOLUME 3: THE SUBLIMINAL VERSES” James: I’ve always liked Slipknot, being 15 and discovering this weird band that wear masks, have a load of members (some that hit beer kegs with baseball bats) was so intriguing. This album was the first I’d heard of theirs, I remember seeing Duality on Kerrang! TV, how could you not listen to that song and be hooked? I think it’s great how whilst they can make extreme metal music they also work in the huge choruses and great acoustic/softer songs like Vermillion (Part 2), my favourite song from the album.

DEFEATER – “LETTERS HOME”  Ben: I got into Defeater and bands like Defeater 4/5 years ago, listening to them is always a refreshing take on heavy music, I can’t really explain it. Instrumentally it just works so well, guitars are great especially on this album, and drums, Joe Longobardi’s drum fills and style of drumming is great, it’s so energetic and on point. All the slight gaps between the verses and choruses are so unique, they’re a really tight live band too. They also have an on-going conceptual theme that carries on with each album. Listen to Bastards, No Faith and Dead Set.

METALLICA – “RIDE THE LIGHTNING”  James: Slipknot got me into heavier music/more extreme metal but Metallica (as I’m sure it did for a lot of kids our age at the time) got me into metal in general. I think that’s what’s cool about our band as well, we all like the same music but do have our go-to genres, which we draw and get different ideas from and I think that does come across in certain parts of our songs. Metallica also brings back memories of us being back at school, hanging round at my house and trying to learn guitar and cover songs like ones on this album. Fade To Black and Creeping Death are my favourites.

MODERN BASEBALL – “SPORTS”  Ben: I only got into Modern Baseball last year, I’d downloaded them to my phone in 2014 after I’d heard a few songs from You’re Gonna Miss It All, their album that followed this one. I don’t know what it was I just never properly checked them out until one day at work I had my music on shuffle and Cooke came on, I listened to it all the way through and loved it, instantly put the band on shuffle and that really got me into them. They’re a softer emo/pop punk-esque band that are just really unique, they come across laid back, as if they’re talking to friends through their music and at the same time are addressing really heart-felt issues. After that day of discovering them properly I listened to nothing but them for 2 weeks straight. Awesome band.

SUM 41 – “ALL KILLER NO FILLER”  Lewis: My favourite genre of music is pop punk, old or new I’ll probably be into it. I thought Sum 41 were like a harder Blink-182. They’re not super serious in places on this album or don’t seem to be but still have those hard-hitting songs. Albums like All Killer No Filler and Blink-182 made me want to start playing drums. While some of our choices may not sound like the music we play, they’ve definitely influenced it. Sum 41 and Blink are have stuck with me since I was really young and I’m sure I’ll still be listening to them in the car when I’m 60. Fat Lip has to be my favourite song on the album, just because it’s Fat Lip.