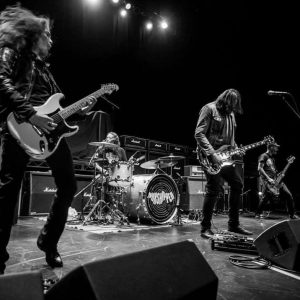 Altered States This was one of my dad’s favorite movies. We had the laser disc and I have always just loved the how psychedelic and kind of terrifying it was. John Brookhouse

Ghost World  If there has ever been a movie that sort of summed up my dark and cynical humor, it would be this one. I’m a huge Dan Clowes fan, and this was really just a spot-on recreation of the characters in his comics. Plus, this is also the genesis of the term “Blueshammer” to describe terrible, heavy handed “blues” that people try to pass off as authentic these days.  John Brookhouse

2001 – A Space Odyssey Kubrick was just the master. I almost put “Eyes Wide Shut” here instead of this one, but I figured people might think I was being ironic.  John Brookhouse

Strange Brew (1983) Rick Moranis and Dave Thomas as Canadian deadbeat beer-addicted bros who get locked up in a mental institution after their ruse to acquire free beer from the Elsinore Brewery goes awry. Hockey, beer, sausages, espionage, intrigue, a flying dog, Paul Dooley, and a bit of the supernatural. This movie has it all. Highly quotable. I probably see it at least once a year.  Alejandro Necochea

Blazing Saddles (1974)  Written by Mel Brooks with Richard Pryor, it’s a parody of the classic western that tells a story of American-frontier expansion warts and all while also exposing the excess of Hollywood at the time. Nothing is too outrageous to lampoon: bigotry, commercialism, the American stage musical, and farting. Whenever I come across Blazing Saddles on cable, I drop everything and have to watch it to the end. Alejandro Necochea

Barton Fink (1991) This one made me a Coen Bros and John Turturro fan for life. The story of an uptight New York playwright who tries his hand at screenwriting in Hollywood in the 1930s. Murder, intrigue, the supernatural. John Goodman as a lovable and menacing serial killer storming through the fire-engulfed hallways of a terrifyingly drab hotel screaming, “I’ll show you the life of the mind!” I love it. Excellently paced, haunting, and hilarious. No one is making movies like this anymore. – Alejandro Necochea

La Jetée‎ ( ‎Chris Marker, 1962) This was what the movie 12 Monkeys was based on. Such a cool Sci-Fi film in black and white composed almost entirely from still images. Many of them found images. Just incredible to see how still images and narration can go a long way. Way ahead of its time (and much better than 12 Monkeys in my opinion)  Bob Maloney

Maximum Overdrive (1986) This is the greatest piece of film ever created. Dave Jarvis

Mystery Science Theater 3000  It was 20 years ahead of its time. Dave Jarvis

Bow at the altar of Worshipper