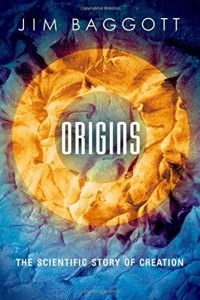 Attempting to tell the story of Creation from the origins of the Universe to the dawn of Homo sapiens is an ambitious endeavour, and most popular science authors would concentrate on their own area of specialisation to tell just a part of this tale, so it’s a credit to Jim Baggott that he has attempted to cover the story of creation from the perspectives of astrophysics, biochemistry and genetics (with even a slight touch of psychology), in a concise and clear text with a firm eye on the non-academic audience.

Although the tone is geared to the general populace, a basic knowledge of science is essential to get to grips with many of the concepts Baggott covers (particularly the physics and biochemistry elements of the book), and if I’m being really honest  ‘A’ Level standard would be better. It’s not that the author has clouded the concepts in arcane scientific jargon, merely an observation that some of the theories and concepts covered in the book require at least some background knowledge to fully appreciate. That said, Baggott has included informative endnotes to each chapter that cover some of the more ‘difficult’ or obscure topics (the angular momentum of a rotating object for example being a concept you would rarely encounter in your daily life).

Origins covers the entire known history of the Universe from the origins of Space-Time, the formation of matter leading to stars, galaxies and planets (with obvious focus on the Earth) to the formation of single cell life and its evolution to multi-cellular organisms including the human race with its distinct consciousness  – in less than 400 pages! That’s quite a feat; but also a sensible decision as it allows the author to maintain the readers interest while covering areas that would leave most people confused or potentially bored (let’s be honest how many times have you thought to yourself “what I really feel like reading about today is Amino Acid chirality” or “I find the analysis of the spectral radiance of the cosmic background radiation as a function of wavelength a real ice breaker at parties”?). By minimising the jargon and explaining the concepts in straight-forward terms, with judicious use of popular cultural references (The Matrix, Jurassic Park etc.) and humour, Baggott has written a factual book that grips the reader like a novel.

Rather than take the arrogant position of Religion, Baggott candidly admits that there are gaps in the science behind the origins of the universe, and the evolution from single cell organisms to Homo sapiens as the dominant species on Earth (while acknowledging that our status was by no means a foregone conclusion – there were at least 4 other species of the genus Homo occupying the Earth simultaneously),  and while it is unlikely (at least for the immediate future) we will be able to accurately deduce what happened in the few billionths of a second after the Big Bang or discover the missing link(s) from the fossil record, Origins is as comprehensive a scientific account of Creation as is possible.

Origins should be required reading, not only because the scientific story of Creation encourages critical thinking, but also because it’s a story of such captivating beauty that it deserves to be studied and appreciated by everyone.   Ian Pickens