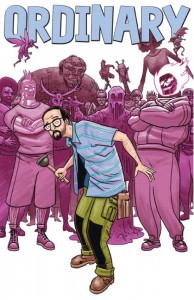 Ordinary – Rob Williams & D’Israeli (Titan Comics)
Everyone, at some point in their life, has thought about what it would be like to have super-powers; to become a colossus striding the globe with impunity, a god amongst mortals, gifted with unlimited power and carte blanche to use them as they see fit. But what if the opposite happened? What if everyone in the world suddenly developed super-powers and were given the gift to potentially become Titans? Everybody, that is, except for one, normal, completely average everyday guy; the last, solitary Indian on a planet filled with Chiefs.

Michael Wilson is just such a man, and ‘Ordinary’ is the story of his struggle to adapt and survive in a brand new world teetering on the edge of annihilation (after all, if the playing field was levelled and you could suddenly do anything; what or who, could stop you?). Faced with his extreme vulnerability in this new world, his struggle forces him to become the man he should always have been, to realise what’s really important , as he finds himself gaining a sense of composure and purpose while everybody else loses – or abandons – theirs. As he slowly embraces his new life it becomes apparent that he alone holds the key to humanity’s salvation, making him the most important man on the face of the planet. This is a lot for a regular guy to handle; at least, it would be if his government doesn’t kill him first. Michael Wilson’s day just went from bad to worse, but that’s what happens when you’re the only ‘Ordinary’ human left on Earth, and before the sun finally goes down, it’s going to get one heck of a lot worse.

Rob William’s story is a blackly funny take on the idea of super-heroes that explores what might actually happen if the average man or woman on the street suddenly became all powerful. ‘Ordinary’ allows human nature in all of it’s nasty, self-centred glory to take centre stage and throws any idea of altruism out of the window along with the rose tinted glasses that mainstream titles and publishers cling to so fervently. It paints (and boy oh boy, does this painting look good thanks to the work of the mighty D’Israeli) an unforgiving picture of humanity; one in which Michael comes to embody and reflect everything noble and fine about our species while those granted the gifts of universal might succumb to the base biological instincts that have forever held our species back. So, what about Michael? Does he save the world or end up getting squished beneath the size six hundred boot of another faceless, infinitely powered being? That boys and girls would be telling, and you know how I feel about spoilers, and if you want to find out, you’ll just have to read the book yourselves. As brutal as it is funny and as intelligent and thought provoking as it is violent and gory, ‘Ordinary’ takes an age old idea and flips it completely on its head, and in doing so creates something fresh, exciting and thoroughly enjoyable. Up, up and way! Tim Mass Movement