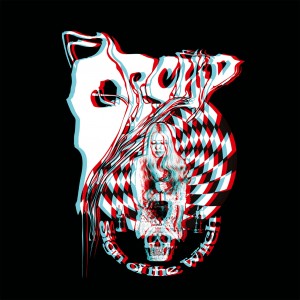 Orchid – Sign Of The Witch EP (Nuclear Blast)
There are so many top quality bands around nowadays, it’s impossible to keep on top of things. Orchid are a case in point – after I had worked out that this wasn’t the old Ebullition records screamo band, but in fact a hot new band doing the rounds on the doom scene, this is the first time I’ve had the chance to check them out. I know that they are hot property and I can now see why. They have taken the Sabbath/ Pentagram/ Lizzy recipe and used it to took up four excellent original dishes of their own. It’s great to hear when a band is able to take those tried and tested sounds and manage to create something new and exciting instead of a tepid rehash of the originals. It’s hard to tell which is their preferred poison, as the EP moves through wafts of reefer smoke into a more hallucinogenic state by the time they his record closer “Strange Winds”. Although all four tracks are up to the same high standard, my personal favourite is the title track “Sign Of The Witch” with vocals that Dio himself would have been proud of, and a killer chorus to round things off. With a sound as floral as the patterns on their shirts, this is a great stop-gap EP that whets the appetite for the next album and in the meantime I’ll go check out their back catalogue. Tom Chapman