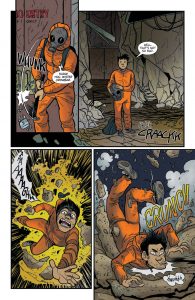 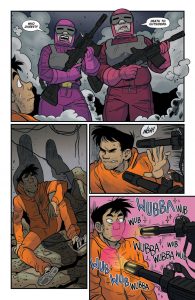 At The Long Con, nerd currency is king! This July, Oni Press invites readers to discover the post-apocalyptic societies inside convention life. The Long Con is a humorous action/adventure for teen and adult readers alike, whether con-goers or not, written by Dylan Meconis (Family Man, Bite Me!) and film critic for The Portland Mercury, Ben Coleman, with illustrations by webcomic artist EA Denich, colors by M. Victoria Robado (Jem and the Holograms), and lettered by Aditya Bidikar. Take a look inside what happens when the world ends, but the culture of Con lives on.

Five years ago, a cataclysmic event obliterated everything within a fifty mile radius of the Los Spinoza Convention Center—including the attendees of Long Con, the world’s biggest (and longest) comic convention. But unknown to the outside world, the con-goers not only survived, they kept the convention going. When proof of their survival surfaces, reporter Victor Lai is sent to investigate—after all, he was covering the con that fateful day and escaped mere minutes before everything went kablooie… abandoning his nerdy pal Dez in the process. So clearly he’s the perfect person for the job, and he won’t get trapped inside like some kinda idiot. Right?

“Pop culture has an image of your average convention-goer, and that image is usually an awkward white dude in a superhero t-shirt, or a ‘sexy’ female cosplayer,” said Dylan Meconis. “That doesn’t correspond to the actual diversity of attendees we’ve met, or the passions that drive them to show up. We wanted to tell a story that reflects and celebrates that diversity while also asking: which media guests would we eat first?” 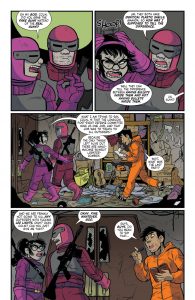 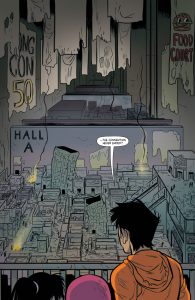 “There’s something really compelling about being trapped in a place you love,” said Ben Coleman. “At first it’s great, but an hour in, it occurs to you that the long term nutritional value of convention center popcorn is limited and some of the goth teens are starting to craft improvised weapons. A pre-apocalyptic comic con already has dozens of factions, feuds, schisms and coups. We’re just making them a little less metaphorical.”

“This book absolutely is a love letter to all the pop culture we hold near and dear in our dorky little hearts—it’s a book about nerds, by nerds, for nerds,” said EA Denich. “It’s a pleasure to work with an awesome writing team like Dylan and Ben, and been a blast to help construct our crazy little con world!”

The Long Con is available at your local comic shop beginning July 11, 2018