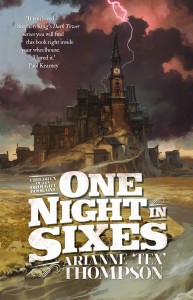 One Night In Sixes (Children of The Drought Book One)- Arianne ‘Tex’ Thompson (Solaris)
“Appaloosa Elim is a man who knows his place. On a good day, he’s content with it. Today is not a good day. Today, his so-called “partner” – that lily-white lordling Sil Halfwick – has ridden off west for the border, hell-bent on making a name for himself in native territory. And Elim, whose place is written in the bastard browns and whites of his cow-spotted face, doesn’t dare show up home again without him.
The border town called Sixes is quiet in the heat of the day, but Elim’s heard the stories about what wakes at sunset: gunslingers and shape-shifters and ancient animal gods whose human faces never outlast the daylight. If he ever wants to go home again, he’d better find his missing partner fast. But if he’s caught out after dark, Elim risks succumbing to the old and sinister truth in his own flesh – and discovering just how far he’ll go to survive the night…”

Post-apocalyptic fantasy western could well start becoming a trend as this setting for tales of high adventure, action and intrigue is gathering a lot of steam at the moment, and Solaris are right at the forefront of the movement.
‘One Night In Sixes’ is a first rate example of this new “genre”, mixing a very sharp take on racism, slavery, justice, love and loyalty, all combining effortlessly in this deep, moving and involving start to a new trilogy. Arianne ‘Tex’ Thomas has brought to life an incredibly broad cast of characters, all of whom have very significant roles to play in setting up this old fashioned wild west story, one that comes complete with its own bad-lands and a whole host of strange, indigenous life. There are plenty of twists and turns in the narrative, with a lot of early events adding an impressive amount of weight to, and paying off in, the latter half of the book.
As a start to a series, ‘One Night In Sixes’ ticks all of the right boxes on the wanted poster and I can’t wait to read the net instalment in the series. Saddle up pardner, and get ready for one hell of a ride… Gav