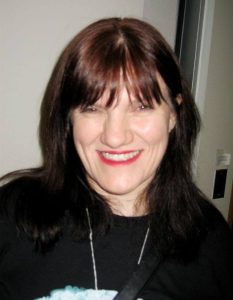 I’ve long been fascinated by ghost stories – I think I read my first such tale when I was nine, and have been engrossed by them ever since. Although I’m a huge fan of horror fiction in general, I have a real soft spot for a well-written ghost story, whether it’s a classic tale such as Edith Wharton’s Afterward or the rather more terrifying God Grant That She Lye Still by Lady Cynthia Asquith, or a more modern story such as Susan Hill’s The Woman in Black (which might be a period piece, but was only written in 1986) or The Small Hand, a ghost story invokes a special kind of emotion on being read. There’s a sense of melancholy, of yearning, what M.R. James called ‘a pleasing terror’ – and of course the delicious chill that trips its fingers up the spine when reading.

All of this made my choosing ghost stories as the subject of my first solo foray into editing an anthology a foregone conclusion, and I was delighted when Constable and Robinson allowed me to do so (I also co-edited The Mammoth Book of Body Horror for them, alongside my husband and general partner-in-crime, Paul Kane; having co-edited our first anthology for Simon and Schuster, Hellbound Hearts). That anthology was a mixture of classic ghost stories such as the above-mentioned Afterward and God Grant She Lye Still as well as contemporary ones written by such wonderfully talented women as Muriel Gray, Kelley Armstrong, Lisa Tuttle, Lilith Saintcrow, Nina Allan and many more. I chose to limit the stories to those written by women to address the many comments and articles I was seeing at that time to the effect that women aren’t represented in horror. That there aren’t many female horror writers – certainly few are any good.

Nothing could be further from the truth! From Mary Shelley’s Frankenstein to today’s novels by Anne Rice, Caitlìn R. Kiernan, Lilith Saintcrow, Lisa Tuttle and many, many more, women have always been part of the horror genre, and I have no doubt that that will continue.

With that in mind, The Mammoth Book of Ghost Stories by Women was published in 2012, and did very well indeed; garnering a British Fantasy Award nomination for Best Anthology as well as excellent reviews.

Paul and I have worked together on other anthologies since, of course – A Carnivàle of Horror: Dark Tales from the Fairground, as well as some projects yet to be seen – but I found myself wanting to do another anthology of ghost stories. Anthologies are difficult to sell to publishers, largely because they don’t tend to sell in as large a quantity as novels, making them more of a risk for a publisher to take on. And so I tried without success to find another home for a second volume of ghost stories. 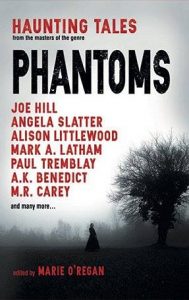 Luckily for me, Titan Books were willing to give me that chance, and so Phantoms is due for release in the UK/US on 9th October. This book is slightly different to my first anthology in that it contains no ‘classic’ ghost stories, only tales from contemporary authors – and I was lucky enough to be able to enlist the help of some of the top authors working in the horror genre today in putting this anthology together. There are eighteen stories: fourteen original to this volume, and four stories I asked to reprint from authors whose work I love and hold in great esteem – John Connolly’s evocative and heartbreaking A Haunting, Joe Hill’s wonderful 20th Century Ghost, Muriel Gray’s Front Row Rider which I first published in The Mammoth Book of Ghost Stories by Women and Paul Tremblay’s entertaining ‘choose your own ending’ ghost story: A Haunted House is a Wheel Upon Which Some Are Broken.

The original stories offer quite a wide range of subject matter, and I’m very pleased with all of them. From Josh Malerman there’s an unusual take on the ghost story with Frank, Hide. Angela Slatter’s When We Fall, We Forget imbues the traditional ghost story with some very non-traditional elements – an angel and a corrupt priest – while Kelley Armstrong’s The Ghost in the Glade deals with a lost child. Gemma Files’ Halloo is a story involving an unorthodox method of ridding yourself of anger. Laura Purcell tells a tale of domination from beyond the grave in Cameo and Helen Grant leads a guilty husband along the Chain Walk. Alison Littlewood returns to the Victorian era to great effect in The Marvellous Talking Machine. George Mann deals with a haunted painting – or is it the artist that’s haunted? – in The Restoration, while Mark A. Latham keeps the visual motif going with his One More Follower. Catriona Ward’s Lula-Belle deals with the unbreakable bond between sisters. A.K. Benedict’s The Adjoining Room takes us to a haunted hotel room, and Tim Lebbon’s A Man Walking His Dog is a gentle story of man’s most faithful companion, while Robert Shearman’s Tom is in the Attic is designed to massively unsettle the reader. Finally, M.R. Carey’s story deals with a corrupt politician, a great number of angry ghosts, and the young girl who helps them.

There’s something in Phantoms for everyone who enjoys a ghost story, I think; at least I certainly hope so! I hope readers enjoy it, and if they do, tell their friends or leave a review on Amazon – I would love the chance to do further volumes. Marie O’Regan

Phantoms is available to order here  and here

Marie O’Regan is a three-time British Fantasy Award-nominated author and editor, based in Derbyshire. She has released two collections, Mirror Mere and In Times of Want, and her third, The Last Ghost and Other Stories is due from Luna Press early in 2019. Her short fiction has appeared in a number of genre magazines and anthologies in the UK, US, Canada, Italy and Germany, including Best British Horror 2014, and Great British Horror: Dark Satanic Mills (2017), and The Mammoth Book of Halloween Stories. Her novella, Bury Them Deep, was published by Hersham Horror Books in September 2017. She was shortlisted for the British Fantasy Society Award for Best Short Story in 2006, and Best Anthology in 2010 (Hellbound Hearts) and 2012 (Mammoth Book of Ghost Stories by Women). Her genre journalism has appeared in magazines like The Dark Side, Rue Morgue and Fortean Times, and her interview book with prominent figures from the horror genre, Voices in the Dark, was released in 2011. An essay on ‘The Changeling’ was published in PS Publishing’s Cinema Macabre, edited by Mark Morris. She is co-editor of the bestselling Hellbound Hearts, Mammoth Book of Body Horror and A Carnivàle of Horror – Dark Tales from the Fairground, plus editor of bestselling The Mammoth Book of Ghost Stories by Women and Phantoms. She is Co-Chair of the UK Chapter of the Horror Writers’ Association, and is currently organising StokerCon UK, which will take place in Scarborough in April 2020. Marie is represented by Jamie Cowen of The Ampersand Agency.