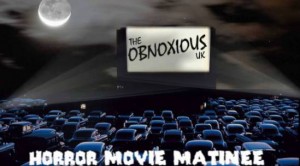 Obnoxious UK – Horror Movie Matinee CD (STP)
I’ve not come across these hellcats before, so kudos to the folk at STP records for sticking their necks out and providing a platform for bands like Obnoxious UK. The band name and album title kind of give the game away, telling us we are in store for a horror punk extravaganza from a band not afraid to stick their two fingers up at life. Stick the disc on and opener “Drinking With The Dead” starts the unholy part off, uptempo punk rock with woah-woah backing vocals on the chorus that fans of the genre know and love. That’s a decent enough track but as the album progresses, Obnoxious UK hit their stride and spread their musical wings, bringing in psychobilly and surf-punk into the mix. That variety means that even at 15 songs the album does not get boring or one-dimensional. The musicianship is top notch but it is the excellent vocals that make this a keeper. Gravelly but melodic, they bring out the best of these songs offering catchy anthemic choruses where you want them. The production is not the greatest it has to be said – a bit rough and ready, but having said that the mix is fine, and you can hear everything well enough. All in all I like this record and I bet they are a blast live. Tom Chapman