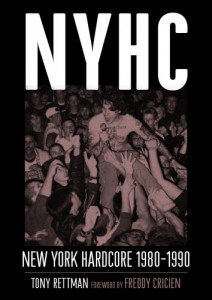 NYHC – New York Hardcore 1980-1990 – Tony Rettman (Bazillion Points)
Having done a tremendous job of covering the Detroit Hardcore scene between 1979 and 1985 in ‘Why Be Something That You’re Not’, I must admit I was quite excited to see what Rettman would do with the NYHC scene – a scene which played a key part in my own entry to Hardcore.
Keeping much to the same format of Oral History as ‘Why Be Something…’, the book uses first person recollections of the NYHC scene’s origin in the tail end of the 70s NY Punk scene and its development into the nastier, brattish younger sibling of that scene during the early 80s with bands such as The Stimulators, The Mob, Kraut and Reagan Youth (the section on Dave Insurgent’s tragic end being the most poignant part of the book). The mid 80s scene of Agnostic Front, The Cro Mags, Crumbsuckers and Leeway which ushered in a generation of metalheads (myself included) is covered from both sides of the fence and the subsequent influence this crossover had on later HC bands acknowledged. The apparently opposing elements of NYHC in the form of straight edge (covered by bands such as Youth of Today and Straight Ahead) and the Peace Punk/Squatter Punks such as A.P.P.L.E. and Nausea are also covered, and the book closes with the new breed of 90s bands such as Madball, Sub Zero, Sheer Terror and Raw Deal/Killing Time that took up of the baton of NYHC and carried it on to a new generation.
Rettman provides a broader analysis of the NYHC scene by including not only the formative musicians of the period but also the zine writers such as Jack Rabid (The Big Takeover) and Lyle Hysen (Damaged Goods), artists such as Sean Taggart, DJ Tim Sommers (WNYU – Noise The Show), promoters/record labels such as Dave Parsons & Rat Cage Records and of course the all-important clubs such as Max’s Kansas City the A7, CBGB and ABC No Rio.
The narratives really do paint a picture of a highly charged, often conflicted scene forged on the streets of the Lower East Side and surrounding suburbs of Queens, the Bronx and Long Island and the enthusiasm people brought to it in whichever way they could. The ‘cast of characters’ reads like a ‘Who’s Who’ of the NYHC scene but whereas Stephen Blush’s ‘American Hardcore’ often read as a score settling tirade of bitchiness and back biting, Rettman’s book focuses less on the differences between individuals and more on the camaraderie and energy that brought people together to form one of the most exciting hardcore scenes of the 80s with the only real negativity being directed at Chris Williamson and Rock Hotel who many protagonists felt exploited the NYHC scene for financial gain.
With a suitably proud forward by Freddy ‘Madball’ Cricien (who cut his teeth in the NYHC scene at the tender age of 7), NYHC 1980-1990 is a triumphant celebration of an often maligned but hugely influential scene and I cannot recommend it enough. Ian Pickens