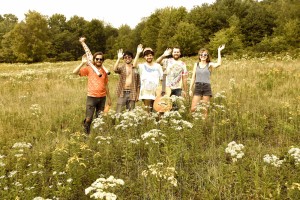 The group is led by vocalist/poet Kassie Carlson and her vivid, imagistic lyrics covering a full spectrum of frequencies, subject matter, and emotional depth. Co-founder, ringleader and most importantly, drummer Peter Negroponte, contributes a sense of rhythm and syncopation equal parts academic and raw, providing a solid foundation for the world-class weirdos making up the rest of the group.

After a month long winter jaunt to Europe to cap off 2014, GT went into hibernation for five months, the longest they had gone without touring or playing shows. They emerged with a new batch of incredible material, coupled with the exciting news that they had signed to New York’s DFA Records – the next logical step in the band’s mission to becoming the world’s largest rage-psych phenomenon.

This brings us to today – GT is more active than ever, with an impressive list of upcoming tour dates, and their first release with DFA. Up first is a limited edition 300 cassette/digital EP entitled Flood Dosed released in the UK on October 16th, followed by a full-length LP entitled to be released in early 2016.

Each song could have been written on a different planet but all within the same galaxy. The old warm blanket of GT chaos is still present but now with added layers of harmony and melody that were only hinted at on previous releases.