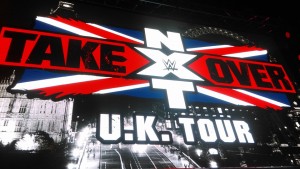 Even the most die hard WWE aficionado would have to admit that 2015 hasn’t been a great year.  The lacklustre build up to what did turn out to be a very good Wrestlemania, the spate of recent injuries and the general decline in viewership and creative direction have left many wrestling fans deflated at best and downright livid at worst.

A fan for twenty years, even I stopped watching their weekly flagship show RAW for six months earlier this year.  WWE have given their fans a reason to be excitedly hopeful for the future when they put on an excellent TLC pay-per-view last Sunday and followed that up with a much improved edition of RAW, but only time will tell if any real change for the fans is on the horizon.

There has however been one aspect of WWE that has given wrestling fans a lot of reason to be excited and is a large reason why WWE still have the number of long-time fans they do, and that is its developmental brand – NXT.

NXT is designed to be the grooming ground where inexperienced, or very experienced performers who need to learn “the WWE way”, go to hone their craft before being promoted to the big time.  Overseen by the man who will one day inherit control of WWE, Paul Levesque a.k.a. Triple H, NXT has become reliably known for it’s fantastic in ring action, logical booking and rabid fans.

NXT usually runs out of Orlando, Florida with its weekly, network only television shows and occasional pay-per-views, however the last 12 months have seen NXT begin to tour the US and cap off 2015 with the division’s first UK tour which rolled through Cardiff Motorpoint Arena on Tuesday 15th December.

Though the Motorpoint wasn’t as full as this writer has seen it at previous WWE shows, when the crowd are as genuinely invested in an event as this one was, it really doesn’t matter.  As the lights went down, a roaring chant of “NXT, NXT, NXT” rose up from a crowd eager to recreate the atmosphere seen in Florida every week.

The opening contest saw Enzo Amore and Colin Cassidy take on Blake and Murphy.  Enzo and Cass are ridiculously over as an odd pairing combo.  The crowd revelled in Enzo’s pre-match promo routine (“And you can’t, teach, that!”) which echoes the Attitude era days of the singalong catchphrases and the duo’s “How you doing?” refrain filled the arena throughout the match.  Which was very good.  Enzo set up a massive hot tag to Cassidy to pick up the win over Blake and Murphy, a team who’ve lost a little momentum since dropping the tag titles last summer.

Asuka defeated Alexa Bliss in the second contest of the night.  One of NXT’s strongest suites is its positioning and presentation of its female division and the Cardiff card featured no less than 3 women’s matches on the 8 match show.  Bliss was allowed to look competitive against the Japanese hard case but it’s Asuka who NXT clearly have the bigger plans for.

Tye Dillinger and Bull Dempsey sought laughs and found them during their match.  Dempsey with his fuller figure was the perfect opponent to send up Dillinger’s narcissistic, perfect 10 gimmick.  The crowd amused themselves with duelling “10” and “This is Bullfit” chants.  As a comedy match, the bout probably went on a few minutes too long but Dempsey and Dillinger never wore out their welcome.

Next up Carmella clashed with the imposing form of Nia Jax.  If there was a moment during the night that the crowd went a little quieter for, it was Carmella vs Jax.  Jax is the latest new WWE star to be related to Dwayne ‘The Rock’ Johnson which will not do her esteem in the eyes of Vince McMahon any harm but she has some way to go yet before she can radiate the personality and skill of her cousin.  But she’s only been around for a couple of months so there’s plenty of time for her to learn.  Jax has a unique look in WWE but is still finding her way to connect with the crowd.

One man who is beginning to make that connection took part in the fifth match of the night as Baron Corbin faced Apollo Crews.  Unlike most of the men who’ve made up NXT’s main event squad thus far, Corbin has never wrestled anywhere apart from in WWE.  A former American football player, Corbin has been built from the ground up by WWE and it’s shown in his skill set on occasion.  However thanks to teaming with ECW old hand Rhyno for a couple of months, Corbin is now starting to show real signs of improvement and is provoking a better reaction from the audience.  His sneer during his entrance to those hassling him from the barriers was very well done.

Apollo Crews is likely to find himself high on WWE’s main roster wish list soon.  Built like a brick sh*t house and capable of throwing a devastating dropkick for a man of his size, Crews has WWE superstar written all over him.  The two assembled a decent encounter in Cardiff which Crews won with his always excellent looking, standing moonsault.  Both these men are clearly being prepared for big things in WWE’s future. 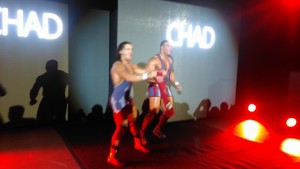 One of the contenders for match of the night saw the quite jaw-droppingly good tandem of Jason Jordan and Chad Gable try to wrestle the NXT tag titles away from Dash and Dawson.  Jordan and Gable have struck a real chord in NXT with their slightly smug, real athletes gimmick but it’s their dynamite in ring performances that have earned them the accolade of being WWE’s best tag team right now.  Thunderous chants of their names to the tune of 2 Unlimited’s ‘There’s No Limit’ greeted the team who were clearly delighted with the reaction.  The match itself with Dash and Dawson, who are no slouches themselves, included a brilliant, double drop kick delivered by the challengers.  The match heated up and took in several red hot near falls before Dash and Dawson just escaped with their inevitable win.  The finishing sequence to the match was so well put together, the crowd actually let themselves believe that a title change might just happen on the show.

Taking the semi-final spot of the night and topping the women’s matches was NXT women’s champion Bayley defending her title against Emma with her cohort Dana Brooke at ringside.  Bayley is awesome – there’s no two ways about it.  Her underdog character is totally infectious and kids and grown ups love her in equal measure.  She’s also been one half of the two finest WWE matches of 2015 in her title matches with the now promoted Sasha Banks.  Cardiff let Bayley know how much they loved her by serenading her with renditions of ‘Hey Baby’ for nearly ten minutes.  Emma and Dana could only look on and try to stifle their own smiles.  There wasn’t an awful lot of time left to have an actual match once the crowd settled down but what they did provide was very good.  Emma is an underrated talent who fell foul of being given a terrible gimmick once on the main WWE roster but she’s now rebuilding herself in NXT. 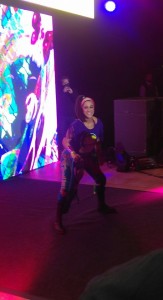 NXT Cardiff was headlined by a triple threat match for the NXT title.  Samoa Joe vs Sami Zayn vs champion Finn Balor.  All three are darlings of the independent wrestling circuit and all three were afforded a great deal of respect by the Cardiff throng.  The entrances of Balor and Zayn, who was returning from injury on this tour, were the atmospheric high points of the night.  The crowd shout of “LET’s GO!” during Sami’s entrance was a fantastic moment.  The match largely involved Zayn and Balor going at it when Joe would allow them and included a bizarre comedy interlude when Sami and Finn tried on each other’s jackets and mimicked their opponent.  The trio whipped everyone into a frenzy for the final few minutes which were pure dynamite before Balor pinned Zayn for the win. 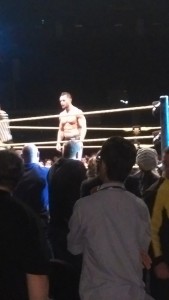 If and when NXT ever return to Cardiff there’s a very good chance that some of the wrestlers who helped put on the best WWE show your writer has ever attended will have gone on to bigger, and hopefully better, things on the main roster, but if WWE can keep finding up and coming talent to match the likes of this then the next NXT tour cannot come soon enough. James Stansfield