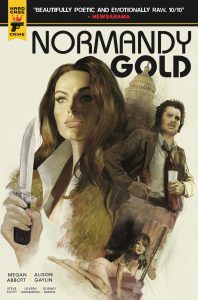 Normandy was going to be called Victory. But then her daddy died in the war and Normandy learned that there was no such thing as victory. She learned a lot of other things, too – outdoors skills, proficiency with weapons – the sharper the better – and an ability to detach from herself and use her body as a tool in whatever way the job demanded. These days – and when I say ‘these days’ I mean the 1970s – Normandy’s a sheriff.

That, at least, is her day job. But when her sister Delilah is murdered, she leaves law-enforcement and the law itself behind to wreak bloody vengeance in the “cities within cities” that make up Washington, DC. Her search takes her from sleazy shagging clubs to high-class escort agencies to the corridors of power and the dark doings behind a Senate probe into a Presidential campaign.

Writers Megan Abbott and Alison Gaylin, together with artist Steve Scott, deliver an homage that is almost a love-letter to 70’s conspiracy thrillers, from The Parallax View through All The President’s Men. So much so that this Hard Case Crime collection of the first five Normandy Gold comic books even contains a mini-competition challenging the reader to spot iconic scenes from the films hidden in the artwork, as well as a ‘fantasy casting’ section of who would play each character were this actually a 70’s film. Points for including Hal Holbrook herein.

It’s fine as far as it goes, ticking all the boxes while delivering nothing more – a twist that would give the tale its own unique spin – in part due to a concentration on Normandy’s character rather than the political and murderous manoeuvrings in which she finds herself embroiled. Steve Scott’s art is equally fine, doing what it has to without going above and beyond. It’s perhaps a little too colourful for the beige decade it seeks to emulate, and occasionally clumsy in its consistency. Much play is made of nightclub owner Johnny Deeper, for example, a character meant to look like the actor Sam Elliott, except when he doesn’t. Prepare yourself for T&A in abundance and some of the weirdest looking pubic hair I’ve ever seen. Now I never thought I’d end a review with that line. 7/10. Mike Wild