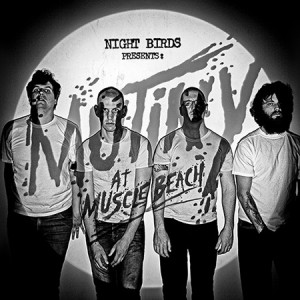 Night Birds – Mutiny At Muscle Beach LP/ CD (Fat Wreck)
Night Birds have been hot property for a few years now, with a couple of excellent albums on Grave Mistake records. In 2013 they released an EP through Fat Wreck and here is the follow-up album to that. Fear not, absolutely nothing has changed in the Night Birds sound. The sound is as gnarly as you would want it to be, with just enough polish to allow the surf-tinged guitar sounds to cut through. On first listen the opening track “(I’m) Wired” threw me just a little as it blasts you at a lightning Zeke/ New Bomb Turks pace. But as the album carries on we are brought back to a more familiar Night Birds world, where all things 1980s hardcore punk are held in high acclaim. Having said that, this is no mere Adolescents/ Dead Kennedys re-hash or adulation, the Night Birds have honed their own style where all the elements come together at the right time and place to create something special. There’s not a weak song on this album, but for me it really builds up as the record progresses, with a killer surf instrumental “Miskatonic Stomp” paving the way for “Left In The Middle” which is their crowning glory, a song I am happen to listen to over and over again. In all honesty a new Night Birds album was never going to suck, but this delivers what you need and then some. Tom Chapman