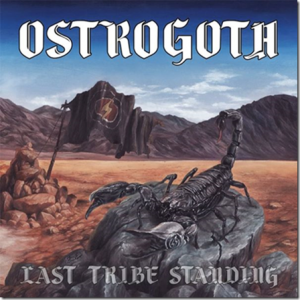 You’ve all been waiting a long time for this, so we’re glad to finally present you the artwork for “Last Tribe Standing”, to be released on January 23rd 2015, through Belgian cult label Empire Records. Artwork created by the talented Velio Josto.

“Last Tribe Standing” is the first official Ostrogoth release since 1987 and features the current line-up that has been active since their return at Germany’s Keep It True Festival, back in 2012.

At first the idea was to release a 4-track EP with new material, just like we did back in 1983 with our ‘Full Moon’s Eyes’ debut. Not a full album, just an EP with four killer songs. But a few days before we entered the studio to record the new tracks, we were listening to the tapes of some summer festival shows we had recorded earlier this year, solely for our own archives. The recordings were raw and 100% live, but the tapes sounded so good, it would’ve been a shame not to use them.
So grew the idea to release two EP’s, back to back. With the four new songs on the A-side of the vinyl version and on the B-side the four songs from the ‘Full Moon’s Eyes’ EP, in a 2014 live version, the way the current line-up plays these songs today. Old and new gathered in one.
As a tribute to the early days we also decided to reuse the original logo that was only featured on the 1983 debut. 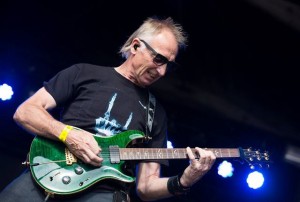 Next to the enthusiasm about the new CD there is unfortunately also bad news to report. Earlier this year Ostrogoth guitarist Rudy ‘WhiteShark’ Vercruysse was diagnosed with liver cancer. Although the situation was very serious, there was initially an estimated life expectancy of two years. WhiteShark started chemotherapy a few months ago and was able to play the summer festival shows in between the many hospital visits. WhiteShark was also present for the recordings of ‘Last Tribe Standing’ and everyone was looking forward to a very busy schedule for 2015. But in recent weeks the situation escalated fast, and the cancer was getting more grip on WhiteShark’s body. Last week, the doctors had to bring down drastically the earlier life expectancy of two years to “a few weeks”.
Yesterday, Sharky gave everything he had to put on a great show, but the chances are that this was WhiteShark’s last show with Ostrogoth.
All scheduled shows for 2015 will go ahead as planned. WhiteShark has recently chosen his successor himself. More details on that later.

Some words from Whiteshark himself…

Thanks to all and everyone for the kind words. It’s a pleasure to read and to know you all support me somehow in this unfortunate situation.
I’m glad I was able to play the concert for Rockfactory on December 6th all through the end, which was my goal anyway. 2015 wil be without WhiteShark as a group member but my spirit will be among them forever and a day.