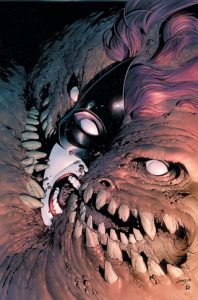 That’s right folks, it’s that time again and so without further ado, or hesitation, let’s dive straight into this week’s books shall we? In Detective Comics #936 the fight that Batman and Batwoman had assembled their new squad of recruits to prepare for, suddenly heats up as the Dark Knight succumbs to the enemy, who move in en masse to take down the rest of the team. James Tynion IV’s edge of your seat thriller veers between the fall of Batman, the still rough around the edges and in need to training squad’s response to the imminent threat they’re facing and Batwoman trying to come to terms with, and accept her new role in Batman’s increasingly secretive world. And talking of Batwoman, when the enemy finally reveal themselves in the gorgeously detailed pages crafted by Alvaro Martinez, Brad Anderson and Raul Fernandez, they’re a little too close to home for her liking and is bound to make family get togethers at Christmas more than a little awkward. It’s a fast moving, continually evolving story, and while the plot has a number of familiar elements and the big reveal become fairly obvious about two thirds of the way into the book, Tynion carries it off, and lets the story unfold with such energetic zeal that you can’t help being wholeheartedly sucked in and enjoying the ride. 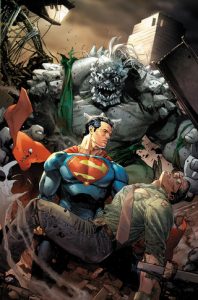 While we’re discussing ongoing stories, it’s probably a good idea to talk about Action Comics #959, in which (new) Superman is still locked in battle with Doomsday. While the city shakes and crumbles under the weight of their pummelling and punishing conflict, the Man of Steel, who is sort of preoccupied with one of the biggest of big bads, has to find a way of distracting his foe so that he can save Clark Kent (yeah, you read that right, there’s a Clark Kent who apparently isn’t Superman and can be in the same place at the same time as him. I don’t know about you, but it definitely sounds like there’s some mischief beginning to brew and bubble to me) and Lex Luthor from themselves as they desperately try to escape from, and become involved, in the unfolding scenario.  Then there’s Lois and her betrothed’s child, who are forced to watch the rapidly escalating situation from afar and while they do the former desperately tries to hide the magnitude of what’s happening from the latter in Jürgen and Kirkham’s blistering and achingly beautiful story of the intertwining lives of gods, monsters and mortals. 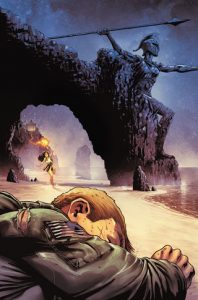 Though her role in the DC Universe Rebirth began in the previous issue with The Lies, Wonder Woman’s quest to find out who she really is, in Wonder Woman #2, Greg Rucka’s Year One gets off to a flying start as it establishes the characters of Wonder Woman and Steve Trevor and their disparate and very different lives before their paths crossed in their explosive, initial encounter. It’s a whimsical tale that adopts a haunting tone as it progresses, and the countdown to their meeting gets ever closer to zero and it’s the story of the doomed, start crossed lovers before they became inextricably intertwined with each other. Year One runs in conjunction with The Lies, and even though they’re separated by time and space, it’s almost certain that they’ll feed into each other at some point, but until they do, just relax and lose yourself in Nicola Scott and Romulo Fajardo Jnr’s sumptuous art and Rucka’s fetching plot. Just for the record, and I know we’re only a couple of issues in, as much I savoured The Lies, Year One packs a much stronger, far more emotive punch. 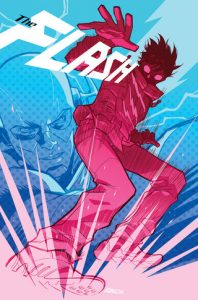 There’s no parallel tales or stories running alongside each other, or weaving in and out of themselves in The Flash #2, which picks up the pace as Barry and the newest speedster in town, his friend August Heart, continue to fight against Black Hole, the criminal fraternity founded by, and obsessed with, science, and the speed force.  Hence their interest in The Flash. Hurtling along at a rate that that would leave its titular hero gasping for breath, Joshua Williamson’s story takes in everything from kidnap and planned extortion to the rapidly changing relationship and personal dynamic between Barry and August. Oh, and the latter, just in passing, because really it’s just one of the many threads running through this book, also reveals that he knows at least one of Barry’s secrets. It looks stunning thanks to Plascenia and Di Giandomenica’s gritty, powerful artwork, and so far, the story isn’t half bad either. . I just hope it can maintain this level of intensity, because if it can, it could easily become one of the books of the year. 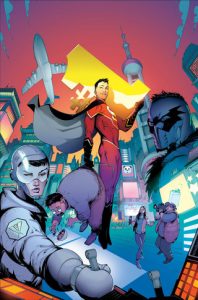 Rebirth was about new beginnings and in New Super-Man #1, a new hero is introduced to the world. Well, China anyway. Kenan, a brash and on the surface not very bright bully is brought to the attention of a secretive government agency when he “accidentally” stands up to a supervillain and is labelled a hero by the media. Drawn into the covert world of state sponsored and created superheroes thanks to that one “ill-fated” decision, Kenan is granted power undreamt of, which will almost certainly come at a price that he’s unable, and unwilling, to pay in future issues.  Fast, funny and packed full of clever, well rounded characterisation, Gene Luc Yuan’s hero struck an instant chord with me, as he’s not just some disposable, two dimensional, vicious idiot who blindly stumbles through life. Sure, he’s a bully, but his reasons for having become so are heart-breaking and his need to prove himself to a parent who doesn’t seem to care about him, adds a tragic depth to the everyday existence of the newest hero in China. Maybe it’s the bright, intricately detailed art of Viktor Bogdanovich, Richard Friend and Hi-Fi that’s made me a sucker for this book, or maybe it’s Yuan’s story, or, and this is far more likely, maybe it’s the combination of both that’s done it, but one things for sure, New Super-Man is one of the best debut issues that I’ve read in a long time. A really, really long time. 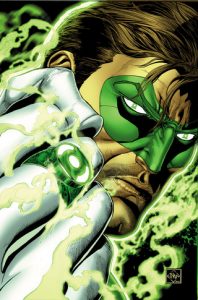 Look, I’m going to make this simple. I’m a not-so-secret and sort of massive Green Lantern fan, and while I’m down with the various incarnations of the Guardian of Sector 2814, deep down, in my heart of hearts, there’s only ever going to be one Lantern and that’s Hal Jordan. And Rob Venditti’s Hal Jordan and the Green Lantern Corps: Rebirth #1, which by the way is one of the most fantastically realised books to have emerged from the Rebirth stable thanks in no small part to the artistic titans Ethan Van Sciver and Jason Wright who have partnered with Venditti to craft this colossus, reinforces my faith in Hal. Left alone in a universe in which Sinestro and the Yellow Lanterns are now in control, Hal determines to find out what happened to his fellow Corps members, reunite them and take the fight to his old mentor in a bid to save all of space from the corruptive touch of fear that Sinestro wields.  This is pure escapism at its finest. Well written and wonderfully illustrated, it’s catapulted its way straight to the Top of the Rebirth Pops and has smashed its way into the chart at number one. Okay, so I may be a little biased, but that doesn’t change the fact that this really is a great book.  Honest.  Cross my heart and hope to… Well, you know the rest. 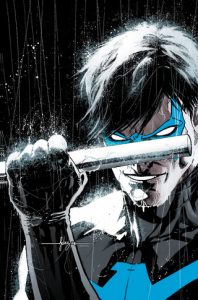 In his life Dick Grayson has been a lot of things, He’s been a spy, he’s been Robin and he’s even been Batman, but having realised his mission in life (to fight, and bring down, the Parliament of Owls), there’s only one role that fits his current agenda. And that’s Nightwing. Tim Seeley’s Nightwing: Rebirth #1 is the story of how Dick comes to once again embrace his old identity and the journey he undertakes in order to reach that point. Yanick Paquette and Nathan Fairbairn have given the book its own unique feel and look, one that thrives on the energy and fluidity of its hero, but is still grounded in the dark world that he inhabits. I think I’m one of the few fans who actually enjoyed Dick’s time under the cowl, and while I was a more than a little upset when he was forced to abandon it for obvious reasons (like, you know, Bruce Wayne not really being dead), I’m overjoyed to see him return as Nightwing. And the book is, well, it’s fantastic. And on that happy note, I’ll leave you to it. Until next week… Tim Cundle