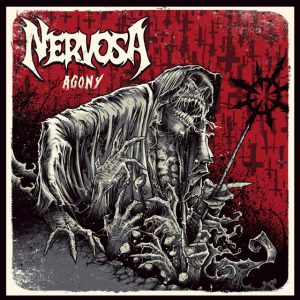 This is more like it, a raging slab of rabid thrash metal delivered by three females that play harder than most men in their genre! Those of you familiar with debut ‘Victim Of Yourself’ will already be aware that the Brazilian trio really set the bench mark for what was to come… And second album ‘Agony’ delivers on that promise and then some. Like a pitbull on heat Nervosa crank the intensity up to the maximum with rampant drumming and infectiously fast fretwork all topped off by the incredible vocals. The danger with any second record is that a band may try and push things too far, and move away from their original sound; thankfully Nervosa haven’t done this, instead they have tightened everything up, locked it down and perfected their neck-brace resonance. Along with (early) Sepultura and Ratos De Porao it’s readily apparent this band are emerging as one of the prongs on the trident of Brazilian metal, as Nervosa play thrash the way it is meant to be played. Full on, and to the point. Thrash fans often talk about ‘The Big Four’, well ‘Agony’ will most definitely go down in ‘The Big Four’ of thrash releases for 201’.  Mark Freebase