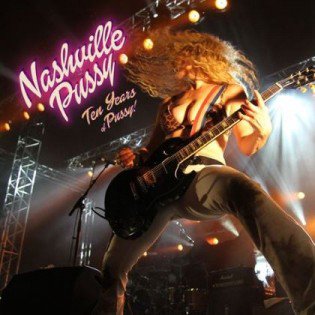 Nashville Pussy – Ten Years of Pussy CD/Album (SPV)
Is it only ten years? Seems like this bunch have been around since the beginning of Rock n Roll itself. 16 studio tracks culled from the bands last couple of albums including a fair few from the bands previous effort ‘Up The Dosage’ including ‘Rub It To Death’, ‘The South’s Too Fat To Rise Again’ and ‘Pillbilly’ which highlights how well received that album was. There’s also the bands ‘duets’ with Danko Jones (‘I’m So High’) and Lemmy (‘Lazy Jesus’) and there’s a bonus 6 track live CD including an absolutely blasting version of ‘Nutbush City Limits’ with Ron Heathman from The Supersuckers. Come on you know what to expect – if AC/DC had come from the Southern states of the US instead of Oz – this is what they would have sounded like. If you’re new to the world of Nashville Pussy this is the perfect introduction. Ian Pickens