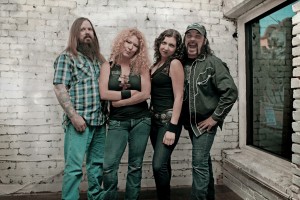 High octane dirty Southern US rock ’n’ rollers Nashville Pussy are set to tour Europe and the UK in celebration of the 15th anniversary of ‘High As Hell’. Expect to hear classic sleazy, greasy rockers such as ‘She’s Got The Drugs’ and ‘Struttin’ Cock’, let alone songs from last year’s acclaimed ‘Ten Years of Pussy’ double CD, containing the very best tracks from their three SPV releases – 2005’s ‘Get Some’, 2009’s ‘From Hell To Texas’ and 2014’s ‘Up The Dosage’. After kicking off in France in March and blazing a trail through Italy, Spain, Germany, Belgium and Holland, Nashville Pussy will hit the UK to play the following gigs:-

Nashville Pussy were formed in Atlanta, Georgia, in 1997. Their unique blend of southern metal, boogie rock and psychobilly and songs about sex, drugs, drinking, fighting and rock ‘ n’ roll soon won a huge cult following in America and Europe. “We were tired of seeing and hearing bands that were just going through rock’s 101 motions, all slick but with no real soul. So we decided to play the kind of music that we would like to hear,” comments  Ruyter Suys on the birth of the band. Their debut album, ‘Let Them Eat Pussy’, released in 1998, spawned a 1999 ‘Best Metal Performance’ Grammy for the single ‘Fried Chicken and Coffee’. Ever since, Nashville Pussy, one of the hardest working bands on the planet, have played over 1,000 gigs in 40 different countries, touring with the likes of Lynyrd Skynyrd, Motorhead, Reverend Horton Heat, Slayer, and ZZ Top, as well as headlining numerous tours in their own right.