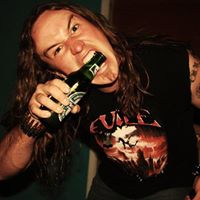 Hey guys I’m Chase with the band Terrifier from Vancouver Canada and I’ll be taking you guys through some of my most important influences. I have so many different influences that come from mainly thrash metal but also death and power metal. I always find my self-drawn to bands earlier albums as they are usually really thrashy and classic. The album Bonded by Blood from Exodus was always one of my favorites. Testament The Legacy is another top one, Chuck Billy really inspired me on this album with his low, high a mid-range vocals. It’s very tasteful how he recorded that one. Metallica’s Kill ‘Em All and Ride the lightning were huge to me as a kid. Metallica was my gateway into metal. That’s all I listened to for five years when I first became a metal head. Slayer has always been a massive favourite of mine. They we’re the first concert I ever went to. Show No Mercy, Hell Awaits and Reign In Blood have inspired me tremendously. I used to read the lyric books front to back. No one writes lyrics like old Slayer. Everything rhymes and is mesmerizingly evil. It’s like the most bad ass poetic stuff out there and so lyrically they set a high standard me. Pantera’s Cowboys from Hell I didn’t hear until until I was 19 but instantly fell in love with it. I’ve always had an ear for groovey sounding blues or rock so they kicked it up 10 notches on that level. Peace Sells was my first Megadeth album and I really got into them after listening to that one a thousand times. Devils Island and Wake up Dead are classics!!! Beneath the Remains by the Brazilian thrashers Sepultura hit home for me with its fast on edge yet catchy riffing and relentless pounding assault on the ears. I find it really cool to hear music from places other than North America. There’s so much wicked stuff out there that’s not in English just waiting be heard. All of these bands have turned me into the metal head and musician I am today. These albums have definitely helped me in the hard times and made the good times even better. These will always be favourites of mine. If you haven’t heard any of these then check them out!