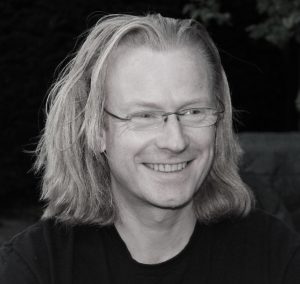 When I was about ten, I gave up on Mallory Towers and got into The Rats. The idea that my own child might open a similar book at that age makes me shudder. And yet, it was the start of a reading journey that eventually led me to write my own novels. It’s hard to regret that.

The books I’ve loved weren’t all horror, though. At the same time I was reading the likes of Herbert and Masterton, I was also enjoying Gerald Durrell

Among my favourites of all time are The James Herriot novels, which were read to me at first but which I soon went on to enjoy alone. I loved the misadventures of the fresh-faced graduate and city-dweller, arriving in freezing rural Yorkshire and trying to prove his worth. The books, which I read many times, were full of humour and depth. 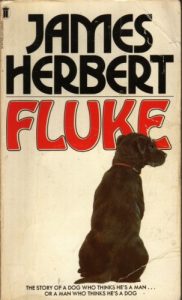 There must have been something about animal stories that struck a chord with me because Fluke by James Herbert caught me by the throat. I remember reading it on a family holiday. It was so riveting, I stayed in all day, refusing to go anywhere with my folks until I finished the novel late the same evening. It’s a story about reincarnation and a quest to discover something lost and precious. It left me hollowed out. 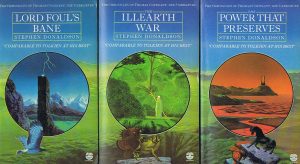 In my teens, my dad joined a mail order book club. Among the first books we bought were The Chronicles of Thomas Covenant the Unbeliever; as close to portal fantasy as you can get without an actual ‘door’. The eponymous protagonist was a leper, outcast by society. But, if he lost consciousness he would wake up as a lauded hero in a world where a great war was raging – and I went with him, literally transported. Fantasy had its hooks into me. 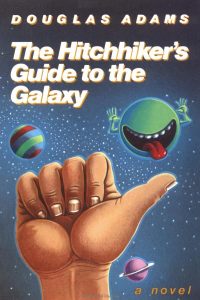 Soon after this, I discovered a series that made me laugh out loud for the first time in my life. The Hitchhiker’s Guide to the Galaxy and its four sequels are the only books I’ve ever read in rotation, again and again. Adams’ skill with comedy, woven into a mind-bending SF epic that spans the entirety of time and space could always get a chuckle out of me. I still wonder now how he got all the plotlines to fit together, though, the bastard 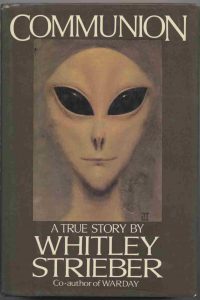 I’ve loved SF ever since Space 1999 but the when I first encountered the notion that aliens might be more than just a story, it floored me. I picked up Communion by Whitley Strieber in an airport bookshop, thinking it was a novel. It wasn’t. According to Strieber, the abduction events he recalls were real. That was too much for my seventeen-year-old mind. It remains one of the only books I didn’t finish – not because it bored me but because I couldn’t handle the subject matter. It’s still on my shelf. I still haven’t read it. 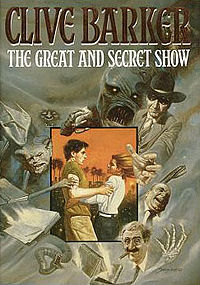 Reading for pleasure took a back seat for a few years as I concentrated on a ‘normal’ job in direct marketing and then I stumbled across The Great and Secret Show. I’d tried a Clive Barker book a few year earlier – Weaveworld – and couldn’t get into it but the Show hauled me in from the opening lines and never let me go. The notion of something miraculous, so close to our world but so perfectly hidden that people had searched for it for millennia totally lit my fire. I went on to read several other Barker titles but, for me, this remains the greatest. 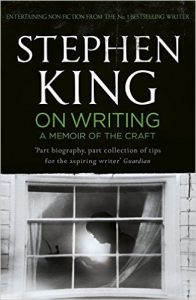 I was thirty before I realised I was a writer. Suddenly, I had a lot of catching up to do. I attended courses, joined groups and read all manner of how-tos. The best of them was On Writing by Stephen King. I’ve read it three times. It’s one of his shortest books and one of his best. In many ways, the autobiographical bits are more involving than the how-to bits but combined they make for an inspiring and engaging experience. 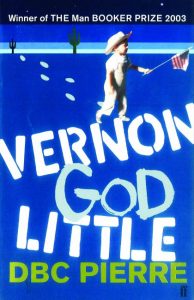 After years of reading, almost exclusively, speculative genre fiction, I dipped my toe into the mainstream. Good books are everywhere, it turned out. There’s a novel about a teenager on the run after a high school gun massacre called Vernon God Little by DBC Pierre. It’s a lot like The Catcher in the Rye only a thousand times better. I loved the language. I loved the characters. I loved the observations. No wonder it won the 2003 Booker prize. 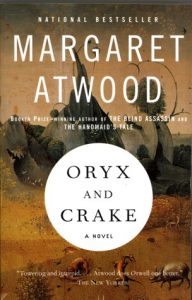 I can’t choose a best book of all time but very close to the top of my top ten is Oryx and Crake, a book which its author says is not SF but which I would place firmly in that category. The novel explores an apocalypse brought on by corporations tampering with genetics. It is, quite simply, ace; lovely language and a beautiful and terrifying story. Margaret Atwood could not be any higher in my estimation. 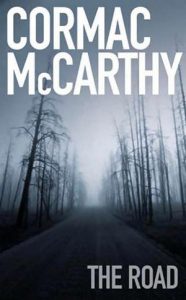 The trouble with top ten’s is that you can only have ten things in them, so this is the end. It really is: The Road by Cormac McCarthy. What a book. Short, bleak, honest, harrowing and so much more. If you’ve never tried depression and are curious, give it a whirl. 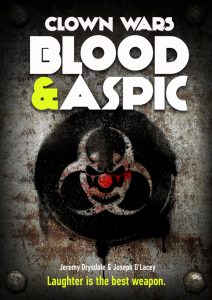 Clown Wars: Blood & Aspic by Jospeh D’Lacey and Jeremy Drysdale is out now and available to buy here

Books, Features
One comment to “My Life in Books – Joseph D’Lacey”