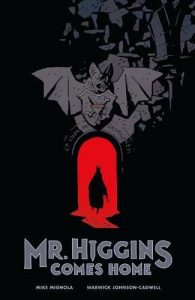 If Jimmy Sangster had written the Fearless Vampire Killers for Amicus and had cast Peter Sellers, Terry-Thomas, Vincent Price,  Andrew Keir and Telly Savalas in the lead roles, then the final, uncut directors edition of the film would almost certainly have shared the same spirit and energy as, and trod somewhat similar unhallowed ground to, Mr Higgins Comes Home. Mike Mignola and Warwick Johnson-Cadwell’s tale of of vampires, a duo of nosferatu hunters, lost love and lycanthropic revenge is a heartfelt ode to the blood sucking horror classics of the fifties and sixties and, most notably the creative forces, of Hammer Studio’s and Roman Polanski.

It’s a relatively straight forward tale of good, with a little help from the avatar of ultimate evil, triumphing over the darkest, collected forces of blackest night, but don’t let the fact that the plot isn’t overly complicated sway you from indulging an hour or two in this wonderfully wicked tale of crimson soaked pandemonium. While the story doesn’t attempt to drown its reader in exposition, much like the films that it honours, the relatively simple narrative allows Mignola to focus his attention on crafting rounded, full developed characters that are an amalgamation of vampiric cinema tropes and stereotypes and horrifically fun dialogue that work perfectly within the confines of the story.

Lightning quick and rapier sharp, Mr Higgins Comes Home is a nostalgic tribute to the era of vampire celluloid in which film makers were beginning to push the boundaries of what they could and couldn’t put in screen, and in some cases, as in Mignola’s story, used humour and drama to distract from the viscera and thus, arguably, created the blueprint for the modern horror film. Utterly compelling and fully immersive, Mignola’s tale is brought to undead life by Warwick Johnson-Cadwell’s illustrative genius, which invokes an eerie sense of history and captures the mood and feel of the cinematic period perfectly. And if I didn’t know better I’d swear that they were both working from a previously undiscovered script that Roger Corman had kept locked away in a vault for the last six decades. Hypnotic, enticing and absolutely wonderful… Tim Cundle