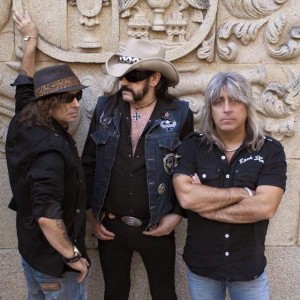 Nine Motörhead albums dating back to the 1979 classics Overkill and Bomber are to be reissued on heavyweight 180g vinyl.

Three titles will be released in March 2015 – with the rest to follow in April 2015. The campaign which follows the acquisition in 2013 of the Sanctuary catalogue by BMG, will be marketed and promoted by [PIAS].
All album artwork reflects the original release from the cover to the printed inner sleeves and will include download codes.

Ace Of Spades – BMGRM029LP – Single LP
(Original release 8th November 1980)
Motörhead’s fourth studio album, released in 1980. Includes the anthemic Top 20 title track. Ace Of Spades has been described by many as one of the best metal albums by any band, ever.

13th April 2015
No Sleep ‘Til Hammersmith – BMGRM023LP – Single LP
(Original release 27th June 1981)
The first live album from Motörhead (actually recorded in Leeds and Newcastle – there was no London date on the tour). It was a UK No. 1 album and is often cited as one of the most essential live albums of all time.

Iron Fist – BMGRM024LP – Single LP
(Original release 17th April 1982)
Iron Fist is the fifth studio album by Motörhead. Originally released in 1982.The last album to include the original classic line up. It peaked at No. 6 in the UK Album Chart.

Another Perfect Day – BMGRM025LP – Single LP
(Original release 4th June 1983)
Another Perfect Day’ is the sixth studio album by Motörhead. The album was released in 1983 and reached Number 20 in the UK Charts.

27th April 2015
No Remorse – BMGRM026LP – Double Vinyl
(Original release 15th September 1984)
No Remorse’ is a 1984 compilation covering Motörhead’s Bronze Records years. TV advertised at the time with a brief medley of several songs before Lemmy’s voice was heard to declare, “‘No Remorse’… go out and get it!”

Orgasmatron – BMGRM027LP -Single LP
(Original release 9th August 1986)
Orgasmatron is the seventh studio album by Motörhead, released in 1986. The album’s working title was ‘Ridin’ With The Driver’ and later changed to ‘Orgasmatron’.

Rock ‘N’ Roll – BMGRM028LP -Single LP
(Original release 5th September 1987)
Rock ‘N’ Roll’ is the eighth album by Motörhead and the first appearance of their four-piece line up of Lemmy, Phil ‘Philthy Animal’ Taylor, Würzel and Phil Campbell, which lasted from 1987 until 1992. The song ‘Eat The Rich’ was written for Peter Richardson’s 1987 film ‘Eat The Rich’, which starred the regular cast of The Comic Strip and Lemmy himself in a bit part as ‘Spider’.