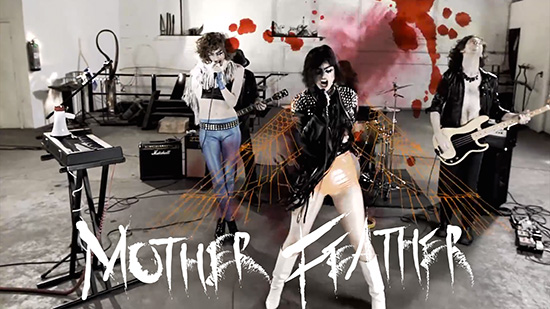 MOTHER FEATHER has released the title track from their full length debut, Mother Feather! The song is available now on iTunes, and the video is streaming at metalblade.com/motherfeather. The video was directed, designed, and animated by Isaiah King (ikingdesign.com).

Vocalist Ann Courtney describes the video and song: “Mother Feather is the embodiment of your wildest inspiration. We are missionaries of pop cock rock and “Mother Feather” is our hymn. Upon hearing it at a live show in 2011, Isaiah King, our director and animator, came to us with a simple, undeniable concept: illustrate the Mother Feather live experience. Isaiah turned out to be the MVP of our artistic collaboration dream team.”

The self-described ‘pop cock rock’ band has been building a loyal following in the late night New York rock scene since their inception in 2009. This fall, fans will be able to see them live during “Pop Cock Rocktober,” the first four Fridays in October at midnight at Rockwood Music Hall, including October 16th as part of the CMJ Music Marathon.

MOTHER FEATHER‘s Metal Blade debut is currently being finalized for an early 2016 release, and will feature two new tracks combined with re-mastered versions of the band’s previously released recordings, Mother Feather EP (2011), Living Breathing EP (2013). Pre-orders for the album will be online in early December.