MOSCOW DEATH BRIGADE – the progressively minded tracksuit & ski-mask wearing techno/rap/punk band from Russia has released a new music video “What We Do”.
A track from the band’s latest album BOLTCUTTER combines hip hop rhymes, hardcore-punk chants and a synth-wave beat. The video comes in support of the band’s current Euro Tour “Boltcutter Part II” with 20 headlining gigs in Continental Europe and seven more in Britain and Ireland.

As all of Moscow Death Brigade’s videos “What We Do” was directed and filmed by the band itself – the video combines breathtaking drone shots of Moscow’s projects, live footage of MDB performing in front of thousands of fans, as well as lifestyle montage of the band rapping, doing graffiti, playing video games, drinking tea (as Russians do) and even petting a cat. All while wearing the band’s iconic ski-masks. Additionally the music video teases short clips showing the making of the band’s previous music video “Boltcutter”, which consisted almost entirely of footage of MDB retro-style video game.

Together with the music video and tour MDB launches a benefit campaign titled “No Means No” in collaboration with organizations helping victims of sexual abuse and domestic violence in Russia. As part of the campaign the band has released an exclusive T-shirt “No Means No” which will be available on Tour at their Merch booth and after the tour will be sold online at Ghettosaurus   and Fire and Flames webstores. All the profits will go towards non-profit groups helping victims of rape. Previously the band has worked with and raised money for the Russian non-profit “Sisters Center” (Центр “Сёстры”). The T-shirt print incorporates a crocodile – the mascot of Moscow Death Brigade, biting a hand, with the hand representing perpetrators accused of sexual violence.

“As a band and as individuals we have zero tolerance for any kinds of sexual abuse. Unfortunately in many places around the world, including Russia, survivors of sexual crimes usually become the blamed ones, receiving no support from the authorities and society, while rapists are getting away with their crimes. If we can rock together – we can stand up together against the culture of justifying rape and give a helping hand to those who need it!” says Boltcutter Vlad of MDB. 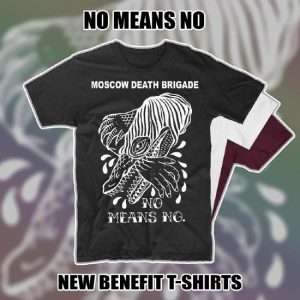 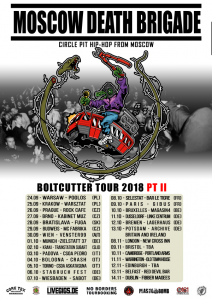 The tour follows the release of BOLTCUTTER album earlier in 2018, which has got to #1 on the charts of punk rock record stores, such as Coretex for several weeks. The first part of the Euro Tour took place in February 2018 with 19 shows, 11 of which were Sold Out, including the Boltcutter album release party in the legendary SO36 in Berlin.